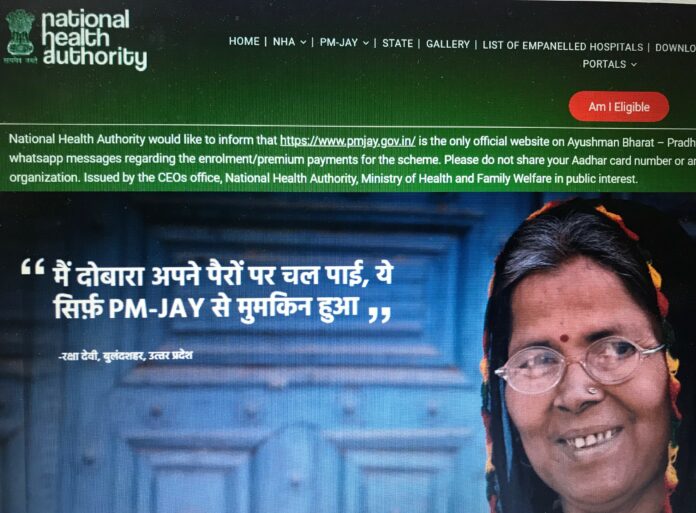 Recently over 150 children died in Muzaffarpur district of Bihar due to Acute Encephalitis Syndrome (AES) or popularly known as ‘chamki bukhar’ in extremely unfortunate circumstances, which could have been easily prevented. In 2017 also, more than 240 children died in Gorakhpur in Uttar Pradesh due to AES. Currently, in India, every minute 21 children die mainly from preventable diseases. And 61 of a thousand children born every year do not make it to their fifth birthday.

The question naturally arises that when we are faced with this grim scenario on health care system, is it feasible to ensure healthcare for all our citizens through programs like Prime Minister Narendra Modi’s flagship health insurance scheme Pradhan Mantri Jan Aarogya Yojana or Ayushman Bharat. The Scheme which has also been publicized as ‘Modicare’, recently completed its 275th day of implementation.

It is high time that public health experts and policy-makers of this sector, review this scheme and other policy initiatives  of the Central government and work on a holistic framework with the States to ensure that such avoidable calamities do not happen again. As the Times of India website reported that none of the kids, who have survived the deadly ‘chamki bukhar’ or are undergoing treatment, has been provided assistance under Ayushman Bharat, it becomes imperative that the scheme is reviewed to remove all inherent faults.

A large part of India’s population, which belongs to the poor strata of the society has always found itself at the periphery of the health care system. The reason for treating them as insignificant is the huge class divide in society. The atmosphere of the private hospitals is not friendly to the poor, let alone welcome.

The private hospitals may have proven to be successful in some cases but they are a big failure in treating patients equally irrespective of their socio-economic backgrounds. True to their business models, the insurance companies are hell-bent on raking in huge profits. That is how they are hardwired as their survival depends on profits earned by them and not on patients’ welfare. In this situation it is not strange that in Muzaffarpur none of the parents of the children suffering from AES, despite of the coverage of Ayushman Bharat went to private hospitals for treatment. On the other hand, Shri Krishna Medical College and Hospital (SKMCH) was flooded by patients and doctors faced an acute shortage of medicines and equipment necessary for treating the critically ill children.

Moreover, it would be naïve to presume that the private sector which has built its reputation for  efficiency will actually deliver on the ground especially in the health sector where already a situation exists where the lion’s share of meagre health facilities have been usurped by the rich. Besides, it would be too much to expect that the system where private players are involved in big way, would not resort to manipulation for profit making or for personal gains. It was recently revealed in a report that a high-profile fraud was spotted in Kashipur, Uttrakand where ghost names of non-existing patients were referred to private hospitals by government doctors. The money paid by the insurance companies for the treatment of these fake names was pocketed by the government doctors and private hospital owners.

The revelation of this scam is an eye-opener and should be enough for us to realize how such loopholes are likely to be exploited. Needless to say that such scandals or instances of exploiting the scheme for personal gains are not mere aberrations and likely to be norm if proper checks are not inbuilt in the system.

This is the reason that many public health policy experts feel that government’s insistence on handing over the healthcare system of the country to private players is not the panacea to fix the health issues. The better and more viable way is to revamp the existing public health care system, they argue.

Some experts are very bitter about government’s moves towards privatization of health system. For instance, just sample this – “How do governments push for privatisation of public property? The theory goes that first they neglect and starve the system of funds. When failing services spoil public perception, they accuse the institution of not working properly.” These are the opening lines of an article titled “Government Hospitals on Sale”, published in the Down to Earth.

So instead of privatizing the district and rural hospitals, (some States have already started the process), the rural areas should have accessible Sub-Centres where patients can be provided with the much-needed first aid. Primary Health Centres (PHCs) which are believed to be the backbone of the public healthcare system should not only be well equipped with the necessary medical apparatuses but also be stuffed with the required medicines.

PHCs are currently running under-staff. More than 70 per cent of the posts of specialists are vacant in PHCs. Same is the case of Secondary and Tertiary Health care institutions. The only possible way to restore public faith in the healthcare system of the government is to strengthen these clinics and hospitals. In last year’s union budget, India allocated just a little over one per cent of its Gross Domestic Product (GDP) on healthcare which will not fall even near to other countries’ expenditure on health. This shows how serious our governments are towards the health of the people.

The Union Budget, scheduled to be presented on July 05, 2019 by the Modi government will be its first after getting re-elected with an overwhelming mandate. It will reveal how much the government has introspected on its earlier schemes and where does healthcare fall in its priority list.

After the death of more than 150 poor and malnourished children in Muzaffarpur, Bihar chief minister Nitish Kumar has realized the importance of revamping the public healthcare institutions. He has announced the enhancement of in-patient handling capacity and establishment of a 200 beds pediatric ICU in SKMCH.

It is time when we realize the dire need to completely revamp our public healthcare system and save it from falling into the hands of market vultures. If we don’t realize this, the day won’t be far when our generations will be weighed down under the dead bodies of poor and helpless children. We must never forget that the smallest coffins are the heaviest, perhaps heavy enough to make the skies above our heads hang in shame.