Under the Lens Are local breeds of cattle, pig, goat and chicken in danger? 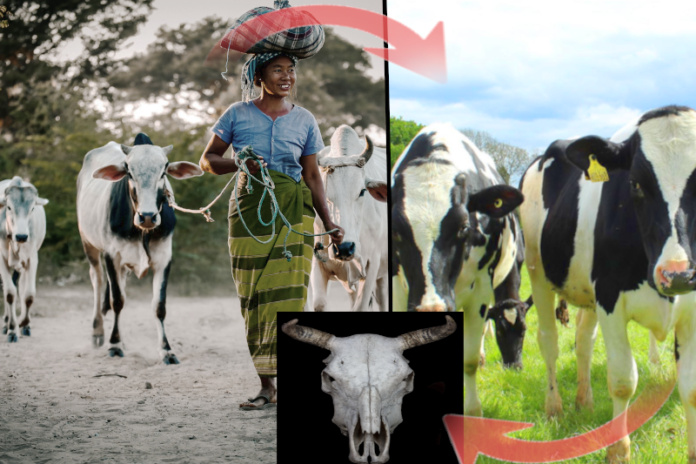 Local cow breeds are disappearing, and that’s not good for you.

The extinction of wildlife sometimes gets headlines due to activism of environmentalists. Some iconic extinctions in recent times such as dodo and cheetah about which we studied in our schools also evoke a strong sentiment in many of us. However, an unseen and mostly unspoken type of extinction is constantly at work in the case of domesticated animals.

And the roots of this man-made extinction of animals that serve us the most lie in the process called domestication.

The story of domestication of animals

Early humans were hunter-gatherers. They did not settle at one place unless the place was very safe and had good supply of animals and edible plants. Then two major things happened in relation to their food and living habits: one, they learned to raise certain plants, and two, they either learned to tame animals for their purpose or some animals became pally with them. The first one led to farming and settlement. The second one led to domestication of animals.

Domestication of animals began only around 12000 years ago. Animals were domesticated by humans in three ways:

Once human populations in different parts of the globe started settling and domesticating plants and animals, they were able to conquer those who were still hunter-gatherers. That accelerated domestication. Subsequently, travels, trade and conquests led to further intermixing of domesticated animals and rise of many breeds.

Take the example of cattle. Their latest known wild ancestors were aurochs, the last of which died in 1627. It is believed that two distinct domestication efforts led to creation of modern cattle from aurochs: one happened about 10000 years ago in Anatolia (West Asia), and the other took place 8000 years ago in the Indus Valley (India-Pakistan). For many millennia, there was large-scale adoption of cattle for milk and draught purposes. Farmers selected animals that gave better yield and were suited to local conditions, and used them for breeding. This resulted in creation of over a thousand local breeds of cattle by the end of the nineteenth century.

At present, 1050 local breeds and 209 trans-boundary breeds of cattle are in existence. Sheep is another domesticated animal with a high number of breeds available: 1146 local breeds and 228 that go beyond national boundaries.

India is rich in diversity of animal breeds. There are 43 defined breeds of cattle, 15 of buffalo, 43 of sheep, 34 of goat, and 19 of chicken. There are also many native breeds of other domesticated animals including camel, horse, donkey, pig, dogs and duck.

How can domesticated animals be in danger?

If you are not exposed to information about disappearing animal breeds, you might feel curious as to how cows, goats, hens and pigs, which are raised by billions, can become extinct. It looks intuitive that when we rear certain types of animals, these do not have to compete for survival as in forests, and thus they are guaranteed perpetual existence, isn’t it?

That is right, but let us look at both sides of the coin.

Being under threat or getting extinct is a part of natural evolution among all animals, plants and microorganisms.

There are many theories of biological evolution, but all of them converge on this: One of the most essential qualities of biological beings is that they give birth to new individuals. In this process, their genetic material is transferred to the next generation, and thus the progeny inherits traits of its parents. There is constant intermixing of the genetic material (genes) when parents with different genes mate. The inheritable traits also keep changing because of mutations (accidental changes) in the genes. The traits of an individual can be useful or harmful for their well-being and survival. Individuals with useful traits tend to have better chances of survival and mating, and they transfer their genes to the next generation more as compared to the ones with harmful traits. That leads to creation of individuals with a new set of traits.

That was a simplistic, linear, way of describing evolution. However, in nature, numerous genetic as well as environmental factors operate and influence the transfer of traits from generation to generation.

In the case of domesticated animals, it is humans that select individuals based on what traits are useful for humans (even if they are harmful to the animal). After the advent of modern animal husbandry, the transfer of genetic traits is greatly controlled by humans through mediated cross-breeding and artificial insemination. Natural mutations are eliminated, and mutations are created in labs to introduce traits that are useful to humans. Thus, animals get created with new traits many times faster than in nature.

Though the history of domestication travels to many millennia, there was no major global effort until two centuries back towards raising superior breeds by importing elite breeds or their semen. In the case of cattle, local farmers used to select sturdy bulls and use them for breeding cows. That led to useful mixing of good genes among local breeds. Then came large-scale import of most-valuable breeds (e.g. Holstein and Jersey) or their semen, and artificial insemination.

In the greed to maximise gains – be it milk, meat, wool, racing speed (as in horses) or ferociousness (as in dogs) – humans have promoted a handful of breeds, ignoring the rest of them. Thus, a cow breed that is perfectly suitable for the hot and dry climate of Gujarat and adapted to fight local infections and pests is ignored in favour of a European breed that yields much higher quantity of milk though it is vulnerable to local diseases, and needs special care and food. Over time, fewer farmers rear local breeds (especially those with little perceptible gains), and their population goes down to unsustainable levels. If not conserved, these breeds become extinct. This man-made ‘evolution’, thus, gives rise to animals with traits that suit humans and not the animals.

Thanks mainly to the inability of economically weaker sections of the populations to raise crossbred high-yielding cattle, more than a thousand breeds of cattle still exist. Parallels can be seen in the case of many other domesticated animals.

Extent of threat to animal breeds

The Food and Agriculture Organisation (FAO) says that out of about 8700 breeds of domesticated animals recorded so far, 2281 or more than a fourth are at high risk. But if you thought that the rest are not under threat, you are mistaken. The fact is that the risk status of 67% of breeds is ‘not known’ and only 7 percent are considered ‘not at risk’ of extinction!

About 9 percent of the existing breeds are in a critical stage. About 7-8 percent of known breeds have already become extinct in the last two centuries, many of them without being even recorded. Cattle have borne the brunt of extinction; 174 of the known cattle breeds are now extinct. Sheep and chicken also have a large number of breeds that have disappeared from the scene.

India is supposed to have one of the biggest cattle wealth in terms of genetic diversity. However, much of that is now lost to farmers. It is documented that while many local breeds have disappeared without a trace, many have only a few individuals left.

Will there be no cows and sheep in some years?

The issue is not that these animals will not be there, but that their diversity will go down if it is not conserved.

The scientific community has been alive to the threat of extinction of local breeds of domesticated animals, for decades.

Scientists have painstakingly collected samples of genetic material of a large number of known breeds and preserved them in special conditions in gene banks. Some institutes also maintain live animals of threatened breeds. Yet, only 10 percent of genetic material of local breeds has been conserved, reports FAO.

The progress in conservation has been patchy, especially in poor countries where it gets a low priority, but – with whatever concerted effort has been made towards conservation at national and international levels – the risk of losing local breeds has come down.

As has happened in many other areas (e.g. GM crops), conservation itself is being exploited by commercial interests. The germplasm of many local breeds has been acquired by global bioengineering companies and this common resource is held privately. It is then shared in a way that it cannot be locally duplicated. For example, for rearing an imported cow breed in an African or Asian country, such a breed needs to have at least some resistance against local diseases. The company holding germplasm of a local breed would introduce this genetic material in a commercial breed and sell the breed at exorbitant price in the same country from where the germplasm was acquired.

Why is genetic diversity so important?

I have talked about the importance of genetic diversity of domesticated animals, in bits so far. Let me explain that in one go.

In the wild, each animal has a combination of traits relating to its size and strength, speed and alertness, food habits, special features for attack and self-defence, resistance to diseases and pests, and so on. A horse with higher speed and stamina will be able to protect itself against hunting animals. But if the horse cannot survive with dry grass, it cannot survive in grasslands that remain dry most parts of the year. Horse that has a skin colour that mixes with that of the dry grass will survive in such a grassland better even if it has a lower speed and low preference for dry grass. So, nature rewards different types of animals of the same species in different ways. Some of these traits are hereditary. When the animals with different traits cross-breed, these traits get mixed; they supplement one another or are neutral or work at cross-purposes. A breed that has a mix of many favourable characteristics for a particular habitat has the maximum chance to do well in that environment.

But problem arises when we stop rearing local breeds and raise elite breeds indiscriminately. These elite breeds are often intrinsically vulnerable to many diseases and environmental stresses of the new area. Further, since the same breed is being reared in a large area, a new disease can spread fast among all of them. Thirdly, such large-scale monoculture leads to fast decline in the population of local breeds (which are evolved to do well in the local habitat). Lastly, introduction of elite breeds in countries like India introduces a new type of financial stress among farmers. You might have come across media reports of farmers suffering badly and even committing suicide after taking a hefty loan to buy an elite cow and not being able to maintain it or the animal’s yield going down or the animal succumbing to some disease.

Over a long time, when a local breed disappears, humanity loses all the favourable genes that the breed carried, and some of these genes might not be there in any surviving breed. Thus, we lose a great resource with an unknown but great potential: perhaps some of the genes the cow has lost could have been useful against a future pandemic and surviving in unseen conditions caused by climate change.