Under the Lens I KNEW ECLIPSE WAS A SHADOW WHEN MOST OTHERS THOUGHT IT WAS... 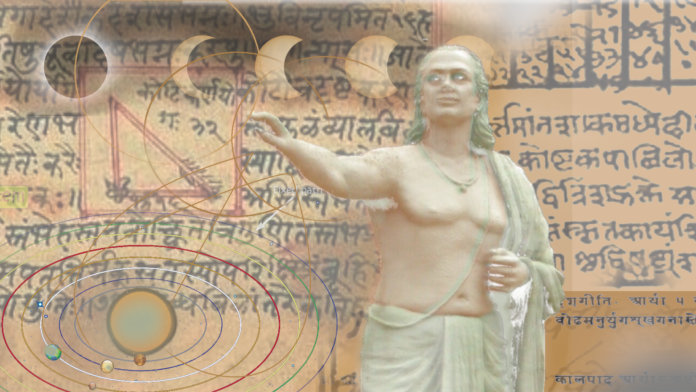 I am Mitabuddhi. I lived in the city of Kusumapura (कुसुमपुर), the capital of the Gupta kingdom. The great Guptas’ empire was in decline, yet the kings followed the tradition of patronizing scholarly activities and giving high regard to those engaged in the pursuit of knowledge. Narsimhagupta was on the throne during my adulthood. It was 1500 years back.

Though my colleagues in the gurukul gave me this demeaning epithet of being a dullard, what makes me proud is that I was one of the disciples of Acharya  Aryabhata. He was not a spiritual thinker or a saint, but he was venerated as much as them due to his erudition concerning physical sciences, mathematics and astronomy. Being an ordinary student, I seldom met him, but all of us knew about his spectacular accomplishments in these disciplines.

It was common knowledge that Acharya headed mathematics and astronomy department of Nalanda university. He might have been even the kulapati or the head of the university, but I have no first-hand knowledge of that. I only knew about his quiet residence at Kusumapura and that well-known scholars such as Panduranga Swami, Latadeva and Nishanku were among his disciples.

Based on his own record, Acharya was borne on 21st March, 476 by the Gregorian calendar. He lived to the ripe age of 74 years.

I never tried to know which part of Bharat Acharya Aryabhata came from. Some said he was from Kusumapura itself, while some thought he came from the far south, Thiruvanchikulam, a city in what would later be called Kerala. In fact, he was called an Asmakiya (अस्माकीय) for that reason. There was also a belief that he came from some part of central Bharat. All I can say is that he devoted much of his life to the study of sciences, and that was at Kusumapura.

The tradition among scholars of those days was not to blow one’s own trumpet. If you had something significant to say, you would share it with your peers and disciples. If it received general approval and you were sure of your hypotheses, you summarised them in sutras or terse formulations. All was available for scrutiny by the learned, though much of it did not flow to the general public.

Top scholars of my era were in touch with their counterparts in far-away places. I learn that the works of my Acharya were translated in foreign languages, and thus his wisdom soon travelled far and wide. It gives relief to me that some of Aryabhata’s sutras on mathematics and astronomy were translated into Arabic and were developed further by Arabic astronomers. An Arabic translation of one of his works still survives. However, many of his works have perished, and the ones that survived were not understood fully even by his highly learned followers. Some were said to have been transcribed and translated with errors.

Acharya Aryabhata composed his first treatise when he was 23. The two surviving treatises composed by him – Aryabhatiyam and Arya-siddhanta (names perhaps given by followers and compilers) – have been commented upon by many later-day scholars. Since they are in the form of sutras, they need proper understanding. Perhaps this tradition (of scribbling just sutras and not the entire derivation) has led to the lapse of much of the wisdom of ancient times.

His knowledge of mathematics, and its forks that came to be known as trigonometry and geometry, was immense. He could see relations between arms of a triangle and its area, and generated tables out of them. He gave measurements of jya (sine), kojya (cosine), utkrama-jya (versine) and otkrama-jya (inverse sine) with the accuracy of four decimal places.

Look how straight his formula for the area of a triangle is:

It says, a triangle’s area is the multiplication of the perpendicular with the half-side.

Now look at his formula for the ratio between a circle’s circumference and diameter, which is now known as pi:

What he meant was that the circumference of a circle of diameter 20000 will be 62832. He used such large numbers for close approximation of the value, though he himself declared that it was not absolute. So, he had a feeling that this ratio (pi) was an irrational number, and the above was as close to it as he could get (3.1416). Modern day value of pi is not much different from it – 3.14159…

Take some more examples, this time from astronomy. Acharya said, the earth rotated on its axis at a nearly fixed speed. He called one such rotation as a yuga. He said that the apparent motion of the sun and stars in the sky towards the west was due to the earth’s rotation east-ward. For dullards like me, his simile was so apt; he said:

His estimates of the distances of many planets from the earth were very precise. For example, he stated that Mars is at a distance of 1.538 times the distance between the earth and the sun. It is very close to the modern estimate of 1.523.

I am told, in some of his works, he hinted at the sun being fixed and the planets moving around it.

Acharya said, the moon and planets shine because of the sun’s light, and also explained the occurrence of eclipses as shadows covering a part of the moon or the sun, as seen from the earth. He laid the basis on which very precise prediction of eclipses could be made ten centuries later, with a deviation of hardly a few seconds.

Some of these concepts went against the traditional notions, but that did not come in the way of his propounding them. What little I know of the modern world, a millennium later a researcher called Johannes Kepler – who had the benefit of the telescope to observe planetary motion – reasoned that the earth revolved around the sun and was not the centre of the universe. He was chased by the church to live a fugitive’s life and his mother was made to die a witch. Luckily, in Bharat, Rahu and Ketu (mythological figures supposed to bite at the sun and the moon, and thus cause eclipses) learned to live alongside Aryabhata and other astronomers.

Acharya was critiqued by scholars too. He came under criticism from his contemporaries, but such critique was part of the scholastic tradition of those times. Brahmagupta, a later-day mathematician-astronomer, was more critical of him and claimed that Acharya had made a grave mistake in an astronomical computation. I believe that some errors do occur in calculations of celestial movements and mathematical calculations when derivations are based on a series or approximations. Some adulterations could have been due to mistakes caused by people copying the works.

Acharya could calculate the day (or the period of one rotation of the earth) to be what is 23 hours, 56 minutes and 4.1 seconds by the present system, and is highly accurate. Similarly, the year (or the period in which the earth revolves around the sun) was measured with high precision of nearly 365 days, 6 hours, 12 minutes and 30 seconds.

Yet another matter of pride for me, a disciple and contemporary of Acharya Aryabhata, is that his derivations are used in some calendars being prepared even now, with precise positioning of celestial bodies.

Since the tradition was to write sutras and theorems in Sanskrit shlokas, Acharya also  developed an interesting way to depict numbers using the alphabet. In his numeric system, consonants would make the integers and vowels gave them place value. For example, क (ka) had a value of 1, and कि (ki) represented 100; भखी (bhakhi) was 224 and मखी (makhi), 225.

One could thus write values up to many million trillions by way of Sanskrit alphabetic expressions.

Though Acharya did not use an expression for zero, it is said that without his understanding of zero as a placeholder (which was not known to the rest of the world), he could not have used square and cubic roots or carried out complex divisions in his equations.

His knowledge about the spherical shape was exceptional. Perhaps this, and his proposition that the earth and celestial bodies were spherical, complemented each other. He also knew that planets revolved in an elliptical orbit, not circular.

Just because he was my acharya or teacher, I cannot claim that it was Aryabhata who discovered the placeholder zero, a sun-centric planetary system and all the mathematical-astronomical stuff credited to ancient scholars. I know for sure that he had a solid base of many astronomical and mathematical concepts, some of which were developed many millennia before him. Acharya, it appears, had a deep knowledge of shulba sutras (शुल्बसूत्र) and other concepts of Vedic mathematics and later-day advancements. Without that, he could not have developed or solved complex equations, including equations in which more than one integer was not known (later called Diophantine equations). I am not sure, but some wisdom in these fields might have travelled to Bharat from foreign lands.

Let me not try to shine too much in the reflected glory. Let me close with a sense of pride that when India undertook its first space mission to the moon – Chandrayaan – it chose a path different from the usual, and for that they used one of Acharya’s equations.

In this article, the author has taken the liberty to describe Aryabhata’s accomplishments through the eyes of a disciple, a fictional character. But he assures that the rest of the article is based on trustworthy resources, not fiction. Where there is no evidence of a claim or notion, the disciple is made to hint at that.