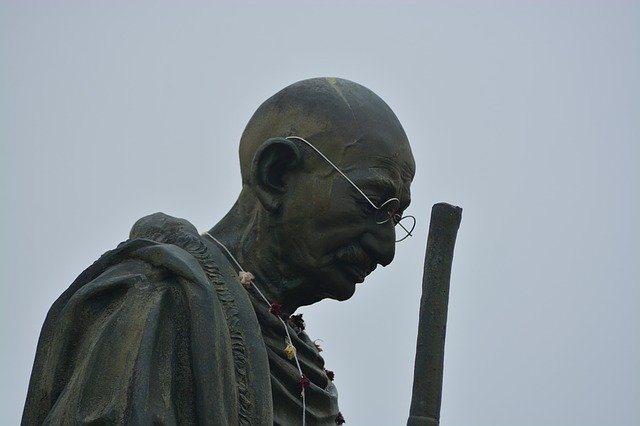 Remembering Bapu on his Death Anniversary : An introduction to ‘Bapugeetika-Songs for the Mahatma’ by Kalpana Palkhiwala*

The 16 feet high statue of Mahatma Gandhi, in a meditating posture, used to greet visitors to Parliament House, New Delhi. It was the site of gatherings, protests, and press interactions by Members of Parliament. It was removed a few days back before the celebration of our Republic Day, as if ‘the father of the nation has changed his residence to some unknown place’!

The State might freeze Mahatma’s ideals in a pair of glasses or in a broom in the name of his one of the favourite cleanliness drive, and try hard to put him on the margin, the movements all over the country by common man remind us that Bapu is still alive.

When does a beloved person die? He/she never dies but lives permanently with us in different ways. He is living in each molecule of this land, each drop of water, and in the air.  The foundations of modern India rest on sound principles that were built up by the independence movement led by Mahatma Gandhi. An earthquake might destroy upper stories of buildings, but it’s much harder to uproot the foundations.

Bapu continues to inspire millions of people across the world. His ideals of non-violence, freedom, equality, and religious tolerance have eternal value. Gandhiji taught us the value of harmonious co-existence and mutual respect. He propounded the philosophy of socio-economic balance with trusteeship. It provides a means by which the wealthy people would be the trustees of trusts that looked after the welfare of the people in general. Gandhiji persuaded wealthy people to part with their wealth to help the poor. It provides a means of transforming the present capitalist order of society into an egalitarian one. The peaceful dharna by farmers, the support to them coming from each corner of the country and other incidents say a lot. Politics without principles and business without morality reminds us of Gandhiji more today.

‘Bapugeetika-Songs for the Mahatma’ is a unique compendium to revisit Gandhiji and re-connect ourselves to the Mahatma and one another through poetry. This is a  project-based on love, compassion, and a ﬁrm belief in progress based on empathy and mutual trust. Bapu is most relevant today and this compendium conveys his message of equality, non-hoarding, discipline, simplicity, the importance of labour, cleanliness, etc. which will cut across linguistic, regional, and cultural barriers. Peoples’ self-esteem will be induced through learning and knowledge of Bapu which will help to participate and contribute meaningfully towards socio–economic welfare.

‘BapuGeetika- Songs for the Mahatma’ is a platform for disseminating songs of and for Mahatma Gandhi. A compendium of 108 songs that celebrate Gandhi. Its intention is to take this music and connect people with Gandhi’s life and message across India and beyond. It comprises the works of 100 luminary poets in 14 Indian languages set to music, spanning 70 years from Gandhi’s lifetime to the present.

It is a rich fusion of history associated with India’s freedom struggle, of a half-dressed man who shook the world, of his music, of his literature, of his culture, and of the passion of the singers, composers, and 100 musicians who have embodied these 108 songs in 14 languages within 14 musical traditions.

This is an exceptional project about the diminutive giant who continues to rule our soul and consciousness. The ﬁnest in the human endeavor- exquisite poetry by individuals deeply inﬂuenced by Gandhiji- from his venerable elder Rabindranath Thakur to ﬁery Subhadra Kumari Chouhan to mercurial  Subramania Bharati. They wrote free verse, rhymes, and couplets redolent of Gandhi’s timeless ideas.

It has unique features like first of its kind in the world, 14 hours, 30 minutes of music dedicated to one person preserves poetic literature, and rich classical and folk musical traditions bring all gems of Indian literature under one umbrella.

Its impact on just one individual has the power to touch millions of other lives, create “spirals of inspiration”- To creatively fashion effective carriers of Gandhi’s principles. By associating with this, one forge bridges between the heart and soul of us all; foster enduring joy and belief in Gandhi’s message. This is a tool to be a part of the social cause – moral boosting and character building.

*Having retired from the Ministry of Information & Broadcasting, Kalpana Palkhiwala got busy in writing, reading, painting, carving, translations etc. One of the very important and prestigious work she concluded is Bapugeetiks- Songs for the Mahatma.

**Bapugeetika-Songs for the mahatma is created by Kalpana Palkhiwala. Details can be seen at www.bapugeetika.com and www.facebook.com/bapugeetika. For further details, contact at bapugeetika@gmail.com or vanikalpana@gmail.com.