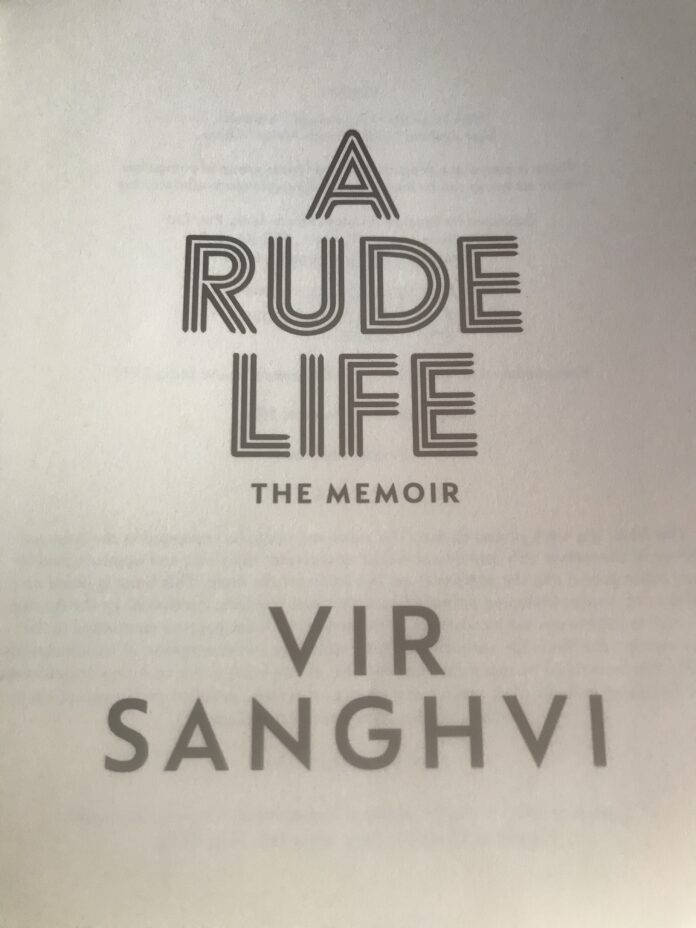 Vir Sanghvi’s principal at Mayo told his mother that he found Vir a little arrogant, but the boy had become serious and responsible after his father died. It would be interesting to read what his mother told the principal in reply, and I leave it for you to read that in his recently published “A Rude Life – The Memoir”. However, if the opening sentence of this review gives the impression that the book is about Vir Sanghvi’ personal life, I would like to  clarify that it is not so.

It is simply a brilliant account of how journalism evolved in the last four decades and how the print journalism competed with Television and how both turned (degenerated?) into good or bad business. The book handholds the reader to make her understand that how we have reached a stage “where nobody knows what is really happening, where facts count for nothing, where opinion masquerades as analysis and where the big global tech companies (Facebook, Google) control a large chunk of public opinion.”

Again, the book is not only about the journalism, it is also a sharp and crisp commentary on the Indian polity during last four decades, full of insights and of Vir’s perceptions about the politicians. Since I also grew up (being exactly two years younger to Vir) watching the same political events, and also because I participated in the political events during my student days, I found his observations very apt and sometimes revealing in the sense that I had not seen these events the way he saw. And I must add that Vir’s  opinions forced me to rethink on certain issues. Here I can mention Vir’s portrayal of V.P. Singh, who I continue to admire for making the Indian democracy more inclusive by bringing OBCs in the mainstream of Indian polity.

Vir crisply chronicles the events of those times and while conceding that V.P. Singh was financially upright and competent, he also says that Singh did a con job by denying Chandra Shekhar the PM-ship. He describes Singh as ‘a little like Arvind Kejriwal’ and as a ‘man without core beliefs…and without any transparency’. Vir describes how V.P. Singh played unfairly with an unsuspecting Rajiv Gandhi who was naïve, ill-advised and inexperienced. It would also have helped, had Vir, while discussing V.P. Singh, explained as to why Singh failed to garner any support from OBCs in the election immediately after he implemented the Mandal Commission report.

Vir does not hide his low opinion about Narsimha Rao. In his characteristically piercing style, he writes, “He was, we knew, the sort of chap who operated better under cover of darkness than in the clear light of day.” Unlike the prevailing view in the intelligentsia  at that time, Vir did not see Rao as a reformer by nature but essentially, a survivor. Terming Rao as ‘shrewd and extremely canny’, Vir writes, “His Ministers were terrified of him, and eventually, he was powerful enough to take on Sonia Gandhi who had made him the Prime Minister.” Vir also quotes from one of his columns published in Sunday which said, ‘The key to understanding Rao lies in recognising that he is a small-time manipulator who masquerades as a statesman.’

Vir’s description of Deve Gowda (PM for 11 months after Narsimha Rao) is somewhat harsh as he seems to overlook the fact that though Gowda was heading a fragile coalition, yet he took several important decisions and at times, he surprised the bureaucrats with his initiatives in several areas. Vir however remembers him only as a ‘unkempt and dishevelled’ Prime Minister who slept at the public functions, though he also concedes that ‘when it came to political manoeuvring, Deve Gowda was no fool.’ In the same chapter, he fondly remembers I.K. Gujral as the ‘global intellectual of the Janata crowd’.

Vajpayee era is also treated with kid-gloves by Sanghvi who describes the regime like this, “Vajpayee managed to run a BJP government that kept the Hindutva ideology away from matters of policy and day to day administration. No one bothered much about the Ram Temple or about the Uniform Civil Code.” The chapter also mentions that how Narendra Modi (possibly with help from Advani) outwitted  Vajpayee who wanted to replace Modi after Gujarat riots. Vir is of the view that despite their apparent differences in running the government, Vajpayee and Advani had a close one-on-one relationship that nobody seemed to understand.

Very significantly, Sanghvi also writes, “I think he (Vajpayee) genuinely wanted to give Advani something he had always longed for. At that time, it was widely believed that…. BJP would win the next elections due in 2004. So, I reckon, Vajpayee wanted to lead the party into the election, win it, return as Prime Minister and then give up the job in a year or so, letting Advani take over. The promotion (of Advani) to deputy Prime Minister was part of that grand plan.”

Dr Manmohan Singh’s period as Prime Minister has also been analysed quite objectively by Vir. He says that the delicate balance between Sonia and Manmohan, that had kept the UPA afloat, was broken after Sonia Gandhi fell ill in 2011. ‘The Party looked for leadership, Manmohan Singh could offer none. The bureaucracy was demoralized…..The PMO, run by incompetents, had no real hold on the administration and so governance ground to a halt,’ Sanghvi writes. He is also critical of the way Manmohan government handled Anna Hazare Moment. He points out that Sonia Gandhi was bitterly opposed to giving much importance to Anna movement and she regarded it as an RSS operation. The book also mentions how Sonia was presented with a fait accompli by Manmohan Singh on Indo-US nuclear deal when he offered to resign if the deal was not through. The issue has been discussed threadbare and does not portray Manmohan Singh in a favourable light. At another place, the author describes Manmohan Singh more harshly when he writes, ‘…Manmohan, rather than owning up to his own shameful inaction in office, was content to be portrayed as a victim of the Gandhis….’

The author also does not agree with Manmohan’s hopeful remarks about himself that ‘History will be kinder to me’ and rhetorically asks, “But will it? I am not so sure. He may well be remembered as the Prime Minister who created the leadership vacuum that Narendra Modi filled.’ Sanghvi seems to be on spot here though it was not all Manmohan’s fault after all.  A non-political person like Manmohan, in the first place, should not have been handed over the highest political post of the country. How can you expect a suave political response from a purely non-political person?

Not very surprisingly, Manmohan Singh is the last Prime Minister discussed in the book. The Memoir does not even touch the seven-year rule of Narendra Modi. However, Modi appears at one or two places in the book while discussing other political personalities or TV shows. For instance, at one place, Vir writes, ‘In those early days of television, guests had no trouble driving to Noida to be part of a discussion programme. We got opposition heavyweights (like Jaswant Singh) and even, then relatively unknown, BJP figures like Narendra Modi…..(An old clip) reminds me of the Modi I used to know in those days; relaxed, jovial, approachable, humble and unselfconscious.’

Besides politics, the journalistic anecdotes have made this book very interesting. As I said in the beginning, it chronicles the ‘growth’ of journalism into what it has become today but apart from that, Vir’s personal journey also has a plethora of material which makes the Memoir a valuable resource for the students of journalism or for anyone who is interested in the subject. It is very interesting to read his analysis about the news operations in India. He succinctly writes, ‘The newspaper proprietors were creating an environment in which nobody was willing to pay for news. They expected it for free. This was a crazy thing to do because newsgathering is an expensive, labour-intensive process.’

It is quite perturbing when one of the most successful journalists of the country says that with each passing month, it gets more and more difficult to survive on hard journalism.  Further expanding on his observation that I quoted in the beginning of this article, Sanghvi writes, ‘It is a terrible way for democracy to function and it can be no surprise that leaders, all over the world, get by, not on the basis of performance, but on the basis of their ability to twist the truth out of shape.’

There are several such insights in the book which make it a serious reading of our politics and society. For instance, at one place he writes, ‘Social media damaged the Gandhis and built up Modi. And TV destroyed Manmohan Singh’s government by slavishly covering the Anna Hazare movement and according undue importance to the allegations it made.’ Similarly, sample this about extremism. ‘Extremists can only win the support of the majority when the state retaliates. Usually such retaliation is disproportionate and indiscriminate and pushes the moderates into sympathizing with the extremists.’

Interestingly, the book has its lighter moments also. The opening chapter ‘Who Does The Queen Go To’ itself is a fun to read. The way Vir describes his meetings with Devyani Chaubal (a renowned film writer of yesteryears) and Raj Kapoor in the most hilarious way or his first meeting with Aveek Sarkar. I will not say more about it so as not to spoil your fun.

Notably, Vir does not talk much about his personal life except in the first few pages when he writes about the parents he was born to and also briefly mentions how he grew up in his early life and completed his education at Oxford. At the end, he writes a small chapter about his complicated relationship with his mother, who was widowed when Vir was only 15 years old.

I have always liked his columns on politics (and food too –I also like to read about different kinds of food though unlike him, I mostly restricted myself to ‘street-food’ as the rest was beyond my means) and therefore, I immensely enjoyed reading this book. To some of you, Vir may sound pompous at places but to me, he has turned out to be a nice person through this Memoir too. There are several instances in the book  when he generously gives credit of his success to his colleagues and to the producers of his hugely successful TV shows.

I wish he had written more about his personal life, but perhaps he has saved those stories to tell another day.

The unbiased political commentary and the world-view seen through the Vir’s journey in the journalism, makes this book very useful to not only for the young journalists, but also for all those who want a concise account of India during last forty years.