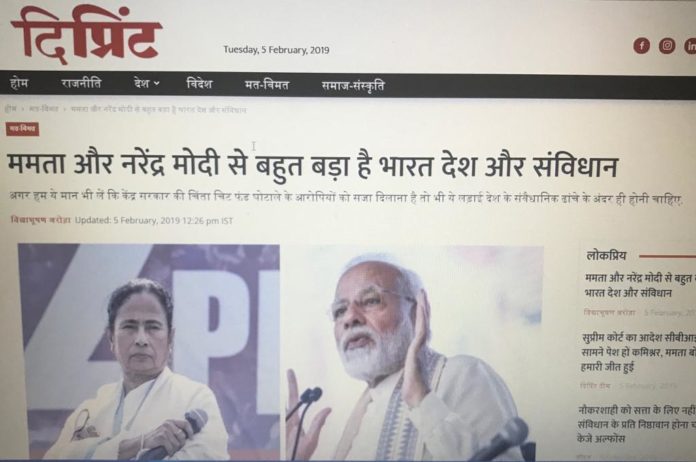 The CBI and West Bengal spat was avoidable as such episodes can adversely impact the federal structure and integrity of the country in the long run.

This columnist had written an article in the Print Hindi web portal on the ongoing spat between the Centre/CBI and the West Bengal government. Following is the free English rendering of the first few paragraphs of the Article to give non-Hindi knowing readers a feel of our argument. The full article in Hindi is available here.

The CBI versus West Bengal episode is in the limelight these days. We are worried for the possible adverse impact this incident can have on the federal structure the country and in effect on the integrity of the country. The Constitution shows us the way in this regard.

It should be made clear at the outset that in the Sharda Chit Fund Scam, we are not in a position to declare anyone connected with it, the wrongdoer or innocent. Why should we have any objection to any investigation  or action against the people linked to the scam whether they are TMC leaders or the leaders who walked out of TMC to join BJP.

In our opinion, each and every case of possible corruption must be investigated. Rafale case included. If there is a row regarding Rafale pricing or about the awarding of the offset contract to Anil Ambani’s company who is going for insolvency in another case, then the demand for constituting JPC should be met to clear all the doubts. It may be recalled that JPC was constituted at the time of Bofors scam also.

The CBI vs West Bengal episode makes us feel that in their eagerness to please the government, the advisors of the government, whether they are senior bureaucrats from within the system or the outside advisors from the BJP, might be over-looking the long-term interests of the nation. It would be difficult to believe that they really would not know the possible adverse consequences of this kind of action by a central agency against the top most police official of a State.

The most unfortunate part of this controversy is that the agency which got centre’s go ahead in this regard is CBI and as we all know, its credibility is in dumps presently. This government has also played its role in making the CBI what it looks today – devoid of any credibility. There could not have been a worse time for CBI to get entangled in another controversy like this.

Even if the advisors of the Union government may not have not read the debates of the Constituent Assembly, they must have read in their school text books that why did we choose the federal structure for this vast country – a country full of diversities, diversities of which we are proud of. Under this federal system, States are not under the Centre – and there is a division of rights between the Centre and the States. There are separate lists to define the rights of these two entities.

Therefore, it is difficult to believe that they did not know that this kind of incident may pitch the State against the Centre and the State may call it the hegemonistic attitude of the Centre………(Full Article in Hindi at the Link given above)