Under the Lens How Many Foreign Veggies and Fruits Do You Eat in a Day? 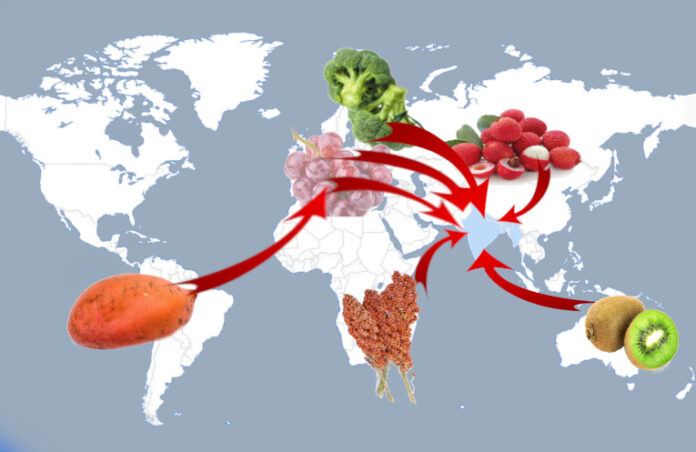 We sometimes hear stories of rich Indians in olden times getting some of their eating stuff from Europe. They probably developed a taste for it when they stayed in Europe for their studies or job. In India, such food (I am limiting my talk to vegetables and fruits) could be had only in expensive hotels and restaurants, which imported the raw material from Europe. Later, raw veggies and fruits were imported and sold in places visited by these uber-rich people, for example Khan Market in New Delhi.

When the Indian economy and society took a global turn three decades back, the taste travelled to ‘aspirational’ middle-income Indians. Now, many ‘foreign’ or ‘imported’ vegetables and fruits are available on the market – online as well as offline. Some of them are now produced in India, and still carry the ‘foreign’ tag. Let me name some of them – broccoli, kale, Washington apples and walnuts, red and yellow pepper, Kiwi fruit.

“But I don’t find imported fruits and veggies as tasty as Indian ones.”

If you have not developed a taste for foreign veggies and fruits such as broccoli or Thai guava or American plums, you may not always find them as tasty as the commonly available Indian varieties. If you retain old-world nostalgia from your childhood days, you might find them bland, tasteless. And if these veggies are cooked the foreign way, they might taste awful.

If foreign foodstuff tastes that way to you, you are not alone. Like many others, your taste buds are not yet ‘evolved’ enough to find foreign eatables and cuisine tastier than their Indian counterparts. Keep trying, man (or lady), and one day you will find broccoli much tastier than its poor Indian sibling, cauliflower.

Here comes the catch: much of what you have been eating since childhood might not be originally Indian at all – and chances are that your (and my) forefathers some generations back did not even know about them.

Take, for example, the omnipresent potato. India is one of the largest producers of this tuber crop (a crop in which the stem or root swells and stores food underground), and potato is a part of numerous vegetarian recipes. But, it is supposed to have originated in Peru, located in the opposite side of the globe! It was domesticated by native Americans, and then spread to neighbouring lands. Until five hundred years back, it was not known outside the Americas. After it was introduced in Europe in the 16th century by the Spanish, it spread fast across all continents.

Today, potato is the fourth largest produced crop in the world and is consumed a lot as processed food and snacks, besides being a regular additive in cuisines. Local selections by farmers have resulted in about 5000 types of potatoes, with a wide range of colours, shapes, sizes and flavours.

Many other popular vegetables of India, including onion, cabbage, cauliflower and tomato, and popular fruits including apple and orange are of foreign origin. Let me list some of them along with their places of origin:

Crops have been travelling far and wide, in multiple directions

Now the world is so highly connected that crops that are grown in different parts of the world are available in most big cities. If climate was earlier a reason why some crops could not be grown everywhere and in different seasons, such limitations have been overcome with the use of modern tools and technologies such as climate-controlled polyhouses and hydroponics.

However, all types of food crops that were transported to other areas could not be grown in the new locations. Yet, some crops could adapt to a range of climatic conditions and others could be grown in new locations having similar climate.   Sometimes, the farmers of the new location were more enterprising than the original place and the crops not only grew well in such places, they also developed more genetic diversity than in their place of origin.

When we look at how food crops travelled from their places of origin in the past, we notice some interesting patterns:

As is obvious, many crops reached their final destinations through other regions. The following crops were introduced in India by colonizers, traders, invaders and travellers though the crops did not always originate in their native countries:

The Indian subcontinent is rich in genetic diversity of domesticated crops, and this region has given many food crops to the world. These include rice, bananas, pea, many spices, coconut, mango, sugarcane, tea and lemon.

So, how original are your veggies?

In a review paper published in 2016, 151 crops in 177 countries were studied, and it was revealed that the most favourite food crops in many parts of the world are those transported from thousands of miles away.

The adoption of foreign crops has accelerated in the last 50 years. As of now, food-crop diversification is so extensive that 68.7% of national food supplies come from foreign crops, taking the mean of all nations. In the case of the Indian subcontinent, that study found, a significant part of calories consumed per day by an average person comes from crops that originated in Africa! A cursory look at the data given in the paper tells that over 80% of an average Indian’s vegetarian diet consists of ‘foreign’ grains, vegetables and fruits.

Before I leave you, let me admit a weakness here. I love foreign veggies and fruits more than Indian ones, not because they taste better, but because they have a ‘foreign’ tag. I – and if you are like me, we – must relish the imported and expensive Kiwi fruit and Thai guava before they lose their ‘foreign’ flavour and become as nondescript as Indian potatoes.

A very brief discussion on the declining diversity of food plants will not perhaps be out of place here.

Modern agriculture has led to creation of high-yielding varieties and their extensive cultivation. The so called ‘green revolution’ has occurred in India, mainly due to cultivation of a handful of wheat and rice varieties. On one hand, these varieties, and those created out of them, take over large areas and thus wipe out the genetic diversity of their less-yielding local relatives. On the other hand, their wild relatives vanish due to deforestation, urbanization, etc.

It is estimated that 75 percent of the plant diversity available a century back has been lost due to extensive use of high-yielding varieties and commercial farm practices. Three-fourths of the food produced today comes from just twelve plant and five animal species. Among food crops, rice, wheat and maize contribute 60 percent to the plant-based food basket.

If that depressing news has ruined your taste, let me bring that back. Efforts are on to conserve genetic diversity of plants, including that of cultivated ones, and these are giving good results. Conservation of biodiversity is being promoted locally and globally. Besides in-situ (=at the place where it exists) conservation, germplasm is collected and preserved in gene banks spread across the globe. Let us hope, our future generations will continue to taste ‘exotic’ flavours despite fast homogenization of food crops.