Under the Lens When and where did river Saraswati flow? 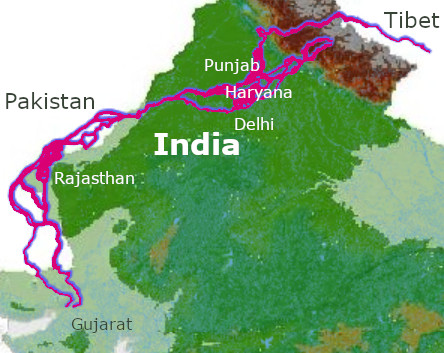 Land and water formations such as hills, rivers, lakes, deserts and plains originate, change their shape and size, and even disappear over long periods of time. Take the case of rivers. Arid areas the world over have rivers that just disappear into sand. In India itself, many rivers are said to have changed their course, merged with others or have disappeared altogether.

However, no lost river has received as much public attention in India as the river Saraswati. There are many reasons for this:

Was there a river called Saraswati?

Let us first settle this question. Though some scholars still think of Saraswati as a mythological river, it is now conclusively proved that a river of that name did flow in north-western Indian plains. It is also now settled that even if some ancient documents refer to Saraswati as an Iranian or Afghan river, that could be a coincidence or misrepresentation. The established view is that the river Saraswati flowed in the plains between today’s Yamuna and Indus rivers.

The following quote represents the view of those who steadfastly cling to the idea that river Saraswati is a myth even if they agree that geological changes might have dried up some insignificant rainfed river in the arid lands of present-day Haryana and Rajasthan: “Thus, the diaspora – the Vedic Aryans, often of tenuous status within their host majority culture – the Harappans – could have created mythic memories of their homeland as a way to assert their exclusivity and otherness. So it is also likely that the Saraswati was a mental construct of the Vedic Aryans, which metaphorically overflowed as they encountered the bleak, water-poor landscape of the Indus-Yamuna interfluve.” [ref 3 listed below]

Varied views about the age and location of Saraswati

In recent times, the river Saraswati evoked interest among scholars of Hinduism on the one hand and geologists on the other, some hundred years back. But soon, many scholars, even historians who were not experts in this genre, and self-proclaimed scholars on everything Indian, started giving their opinion. It is interesting to see how the river Saraswati has been depicted by scriptures, historians and geologists over time:

Once geologists/ hydrologists started studying the river with modern tools, strong evidences started accruing that corroborated the notion that Saraswati was a mighty river. These findings also provide explanation to many archaeological discoveries. Let us look at the major ones:

Whether the river is flowing underground

Yes, and that is not unusual. There are large aquifers in different parts of the globe, that lie under dead or living rivers.

Based on geological and remote sensing studies, aided by the analysis of soil and water where ONGC carried out surveys for hydrocarbons), it has been proved that a huge body of water flows where Saraswati flowed at one time.

In fact, because of this expansive underground water channel, some wells in Rajasthan do not dry up even during drought. In addition, though brackish water is often encountered in tube-wells of the semi-arid plains of Haryana, abundant sweet water is found at certain depth in the Saraswati basin area.

The most accepted view

Many shades of opinion – some conflicting – still float, about the actual course of Saraswati, timings of its decline and disappearance, whether all scriptures and historical documents refer to the same river, and the chronology and exploits of civilizations that prospered (and declined?) along the course of the river.

Whether the Harappan and Vedic civilizations occurred in a continuum or were drastically separate (and which one preceded the other), the most accepted view about the river Saraswati is that it was a perennial river draining into the sea and it nurtured human habitations. Its main channel corresponds to Ghagghar-Hakra-Nara river, which is now purely rainfed. The river had a very wide floodplains in parts of present-day Haryana and Rajasthan and a small part of Pakistan. It is also highly likely that at one stage the present-day Yamuna drained into Saraswati.

The change in the course of major perennial rivers, especially Satluj, due to tectonic shifts seems to be the main cause for decline of the river. Other factors such as the river breaking into many channels, sandy nature of soil, climate change, and human actions might have contributed to the disappearance of the river and the area becoming arid.

Maps courtesy: Saraswati water channel: adopted from a satellite map by Bhuvan/ ISRO; map of Vedic-time rivers: as proposed by KS Valdiya, geologist, author of Saraswati, the River that Disappeared