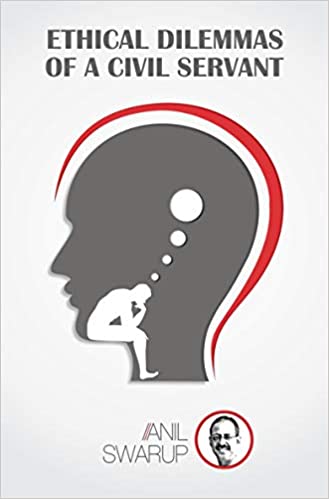 There is no dearth of books on governance, public policy and administration and on the way Indian bureaucracy works. Some of these books have been authored by academics while some others are by former bureaucrats. If we leave aside some books by former diplomats and a few others by IPS officers, there are not many books which may be counted as substantial in content. In this category, three books which were published in last few years come to my mind – N.C. Saxena’s “What Ails the IAS and Why it fails to deliver”, C. G. Somiah’s “The Honest Always Stand Alone” and B.K. Chaturvedi’s  “Challenges of Governance”. All these three books focus on the problems afflicting the system and how and why the delivery is affected.

However, a set of two books – ‘Not Just a Civil Servant’ and ‘Ethical Dilemmas of a Civil Servant’ authored by another senior bureaucrat Anil Swarup who is credited with the successful auction of coal-blocks when he was Secretary in the Ministry of Coal and for the inception and implementation of the Rashtriya Swasthaya Bima Yojana (RSBY), the first IT-based scheme of the government of India. The second book which was published a few months back, has filled the void by focussing more on problem-solving and also guiding how a sincere and honest bureaucrat should steer his/her way in the quagmire of a corrupt and lethargic machinery and continue to do the best to resolve the problems notwithstanding the impediments on the way.

‘Ethical Dilemmas of a Civil Servant’ aroused the interest of this columnist who generally likes to write only on politics and society, because of its subject that is ’Ethics’ as we are living in an age which seems to be almost devoid of ethics and there is no sign of any improvement in this situation. It calls for immense courage on the part of a former bureaucrat to write on ethical issues in governance as this would mean he is virtually closing doors to any future lucrative assignments which he might get in the government besides upsetting some former colleagues and seniors who are not shown in the book in a flattering manner. And Swarup has done that in ample measure.

This book has almost ninety chapters – chapters not in the conventional sense because a chapter normally denotes structured details of a given subject whereas, in this book, we find very engaging real-life narratives in which Swarup had played the central role at various stages of his career as an IAS officer. It may also be mentioned here that these narratives cannot be termed as spicy and piquant anecdotes and certainly should not be trivialised as routine stuff from a former bureaucrat. The most significant aspect of the book is that every chapter ends with a question or rather many questions sometimes which denote the ethical dilemmas of an honest and conscientious officer.

Swarup seems to have made a cautious attempt not to sensationalise his experiences unlike some other authors to grab headlines which may generate some controversy. He has mentioned many such incidents which could have been stated with a lot of spice but the author chose restraint and confined himself only to the ethical issues involved in such incidents. For instance when the author was heading the Project Monitoring Group in the Cabinet Secretariate, he reported the unusual delays and holding up of important projects in the Ministry of Environment to the Cabinet Secretary and requested him to bring it to the notice of the Prime Minister. However, the Cabinet Secretary did not pass on the information to the Prime Minister. Later the Planning Commission Deputy Chairman Montek Ahluwalia who was briefed by the author on the subject informed the PM about it. Swarup also mentions that he got the information passed on to NAC Chairperson Sonia Gandhi also through Oscar Fernandes who was considered very close to Gandhi family and was known for his integrity. Subsequently, Ms Jayanti Natarajan was soon removed from the Ministry of Environment and things started moving there. The author certainly had a choice of writing this incident in a sensational way but he stated the events in his characteristic subdued style and matter-of-fact manner and concludes the chapter with a question (as he has done in every chapter) – “How far was it appropriate for the Cabinet Secretary not to convey the concerns to the Prime Minister about the happenings in the Ministry of Environment and Forest” and also significantly he poses the next question – “Was it ethical on my part to convey details to someone who was no more a part of the government (Oscar Fernandes)?”

Similarly, the author is very modest about his achievements which were many throughout his career. Most significant amongst his achievements (though he does not explicitly say so) was the inception and implementation of Rashtriya Swasthaya Bima Yojana, the first ever cashless, paperless and portable health insurance scheme on a technological platform which later became the model for other well known schemes like UID Card (Nandan Nilkeni had many useful meetings with the author after he joined the government for implementing the UIDAI) and he was also consulted before the launch of the Aayushman Bharat Scheme which Modi government introduced some time back. RSBY was hailed as a “model of good design and implementation” by the World Bank and UNDP and ILO recognised the scheme as one of the top social security schemes in the world. Later as Secretary in the Ministry of Coal, he presided over the auction of coal blocks which was a tough assignment given the fact that it was a cause of major controversy in the latter part of UPA-2.

There are numerous such instances in the book where Swarup could have blown his trumpet but his sublime style of writing ensures that he conveys the central message of his experiences without ever sounding pompous or demonstrative. The book contains several instances where Swarup took stand against corrupt practices, brought misdemeanours to the notice of concerned people and also took risks to correct the wrong doings of others or to implement the policies which he thought would be in the interest of the poor and the marginalised. Swarup wrote about all these happenings lucidly but in a self-effacing manner without being even slightly ostentatious.

However, it does not mean that the author has avoided biting the bullet and refrained from displeasing anyone. On the contrary, he has been forthright and matter-of-factly at most places. There are some chapters in the book where he seems to have digressed from his usual moderate writing style and seems to have deliberately chosen the tough words. The first in this context can be mentioned his scathing observations about the then Comptroller and Auditor General of India (CAG) Vinod Rai who had released a report which erroneously concluded that there was a loss of over 1.7- lakh crore in the allocation of coal blocks. In a severe indictment of Rai, Swarup says that CAG’s miscalculations virtually ruined the coal sector. He further writes that “Till date, the country continues to suffer the consequences of what can only be called the fantasy he indulged in…Greater damage was done to the psyche of civil servants. This damage happened because of the spectacle made out of half-truths….The Rai effect was quite devastating. Officers started adopting a non-committal approach on important files. They started playing safe.”

The author does not say this but apparently this is what has been popularly termed as ‘policy paralysis’ during the latter part of the UPA-2. Swarup also laments that the CAG’s report led to the conviction of officers who had justifiably enjoyed a spotless image and on the other hand the then Prime Minister conveniently distanced himself from the process although he had approved the allocation of coal blocks in his role as coal minister.

Another instance of Swarup being harsh in his writing is when he mentions about the Chief-Ministership of Mayawati. He writes, “She left behind a legacy that destroyed institutions. And the situation in Uttar Pradesh deteriorated further as her successors tried to out-do her in toying with these institutions.” At another place he writes, “The Chief Minister was so full of herself that she could not be told that she had taken the wrong decision. This would have been disastrous.”

Apart from narrating his personal experiences in the governance and public policy, he also deals with some theoretical questions in the beginning and briefly at the end also which could have been called epilogue. Swarup’s commitment to the poor and marginalised is reflected while dealing with such theoretical questions. For instance in the chapter entitled “Is ethics important”, he writes – “If a law needs to be interpreted, it should be done in the interest of the poor. And this is one of the solemn responsibilities of a civil servant. Being, humane and accessible, therefore, becomes a sort of prerequisite for these officers.” He also does not mince words when he says, “The corrupt bureaucrat-politician nexus is emerging as a major threat to the system where the majority of fence-sitters amongst the bureaucrats are wilting.”

Before closing the introduction to this book (or the review if you please), one would like to add that Swarup’s work may not perhaps meet the academic standards of some top-ranked books on governance and public policy and may be it could have been better edited but it is certainly much more useful not only for young entrants to civil services but also for serving bureaucrats of any age. Actually, a  book like this should be widely read by all the public servants in Centre or the States as it would not only help them resolve their dilemmas about work ethics but also inspire them to work for the people selflessly. This is what Anil Swarup writes after being transferred for standing by an honest and efficient junior officer in Uttar Pradesh – “I felt proud of heeding the call of my conscience. I was doing my Karma and I was not bothered about the consequences”. These stories would inspire one and all – even the people working outside the government would find them inspiring.