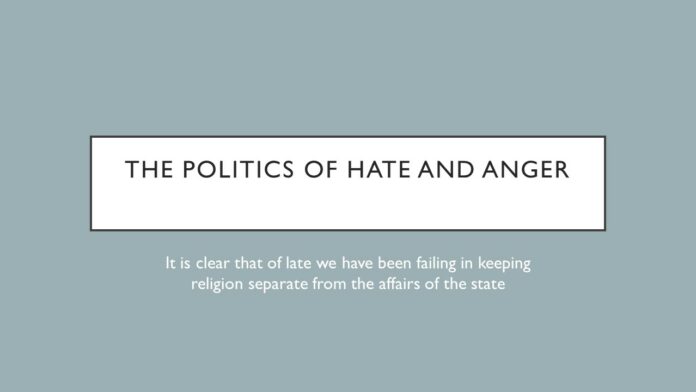 The devil of hatred is such that once it becomes the way of life, it seeks new victims one after another.

After Rahul Gandhi decided to contest from Waynad in Kerala, Prime Minister Modi took it upon himself to deliver the campaign speeches which are replete with communal overtones.

Immediately after Rahul filed his nomination from Wayanad, in the first such speech at Wardha in Maharashtra Prime Minister accused the Congress of committing a sin by linking Hindus with terrorism and mocked Rahul Gandhi for “taking shelter in a constituency where the majority (Hindu community) is in the minority”.

It is indeed very disappointing that the Head of government himself has been speaking in such a tone which is bound to create insecurity amongst the minorities. He used the expressions “Hindu” and “Hindu terror” — a term some Congress leaders were accused of using in connection with the 2007 Samjhauta Express bombings, which killed mostly Pakistanis — 13 times (“Hindu” eight times and “Hindu terror” five times).

It can be asked why did Prime Minister used this ‘Brahamastra’ (the last lethal weapon) of communalism so early in the campaign. Perhaps because the BJP has realised that it is not going to be easy to maintain the kind of lead they got in Hindi belt during the previous elections in 2014. To reduce the possible losses, the Prime Minister and his party want to use every weapon in their arsenal.

BJP has learnt with its experience that of late, politics of hate has started giving it good dividends. Till some years back, the situation was different when the values cherished and carried forward from our freedom struggle had not eroded completely. Not that this erosion of values is complete now but continual portraying of victimhood (that ‘appeasement of minorities’ has harmed the interest of majority) has had its obvious effect. They reaped the harvest of votes after they decided to go full steam ahead on this communal theme.

It seems to be a well-thought out strategy to confine Gandhiji to only ‘Swachchta’ because Sangh and BJP are well aware that it is very difficult to erase the memory of Mahatma Gandhi from the public psyche so far. So it suits Sangh Parivar that they confine Gandhi to ‘cleanliness’ and other such themes and keep his political ideology aside. Otherwise, Gandhi’s views on communalism are well-known and for holding such views, he has always been despised by the Sangh Parivar. This hatred culminated in assassination of Mahatma by one of its members, Nathuram Godse.

It is no secret that that there are many supporters of this government and in the Sangh Parivar who justify the assassination of Gandhi. There is one twitter handle – @IndianInterest – which while reacting to another comment that Godse was a terrorist, wrote – “Terrorists seek to terrorize the populace by mass-murdering innocent people. Godse killed ONE person – and a traitorous British agent at that. Godse was an avenging assassin. He was no terrorist.”

Not only does this handle calls Mahatma a British agent, it also does not believe in the Indian Constitution. Sample this: “We, the people of India, HAVE NEVER RATIFIED THE CONSTITUTION which was drafted by a group of un-elected British loyalists.” This handle has a following of about 60,000 and it is no coincidence that they seem to be staunch supporters of this government.

Immediately after independence Mahatma Gandhi in a speech had said, “Religion was a personal matter and if we succeeded in confining it to the personal plane, all would be well in our political life… If officers of Government as well as members of the public undertook the responsibility and worked whole-heartedly for the creation of a secular state, we could build a new India that would be the glory of the world.”

Almost a year before the above speech, while speaking to a Christian Missionary he had said, “If I were a dictator, religion and state would be separate. I swear by my religion. I will die for it. But it is my personal affair. The state has nothing to do with it. The state would look after your secular welfare, health, communications, foreign relations, currency and so on, but not your or my religion. That is everybody’s personal concern!”

It is clear that of late we have been failing in keeping religion separate from the affairs of the state and this is especially true for the last five years. As a society, we must remember that if the seeds of animosity are sown amongst us, they will spread and the targets of hatred will not be confined to only one particular section of the society. There are some examples from our own past but we leave that for you to remember; here we will understand this phenomenon through the example of Pakistan.

As we know, Pakistan was created on the basis of religion as Mohammed Ali Jinnah from one side and people like Veer Savarkar from the other side believed in two-nation theory based on religion. Jinnah was successful in getting the British to agree for the division of India and for creation of Pakistan on the basis of religion. The Hindus who stayed back in Islamic Pakistan were totally powerless. Soon, the politics of hate found them to be an unattractive target – not much political dividend could be gained by victimising them – so they moved on to find other victims for their witch-hunt.

Pakistani majoritarians first targeted the Ahmadiyyas, followed by Shias and very soon added the ‘Indian’ Muslims (who chose Pakistan as their new dream adobe) to their list. The Muslims who had migrated from India to Pakistan found that they were now ‘Muhajirs’ whose presence as hurting the interests of the locals. Pakistani Sindhis and other language minorities also felt discriminated against. Things deteriorated and culminated in the creation of Bangladesh. It was the biggest blow to the idea of religious nationalism.

Thus even in Pakistan, that was created on the basis of politics of hatred and religious fundamentalism targeted against Hindus, religion failed to become the unifying idea.

The devil of hatred is such that once it becomes the way of life, it seeks new victims one after another.

If for achieving their short-term goals, our politicians continue to incite one religion against the other and if unfortunately our society also accepts this politics of hate, then there is real danger that in our country too, different communities are full of hate and anger against each other. Apprehensive of such an eventuality, some sane voices warn us that if we fail to prevent this politics of hate from spreading, we may very soon find ourselves in the same predicament as Pakistan finds itself in.

It is time that we resolved to stop this decay in our polity and society with all our strength and save our democracy to ensure that we continue to progress with the values of equality, fraternity and secularism as enshrined in our Constitution. We can find many examples which show that the path of hatred does not take any society or country very far and it pushes in the cauldron of civil-wars or wars with other countries.

This article is based on another piece by the same author published in Hindi at https://hindi.theprint.in

‘Health for All’ Possible Only With Adopting Gender Sensitive Approach