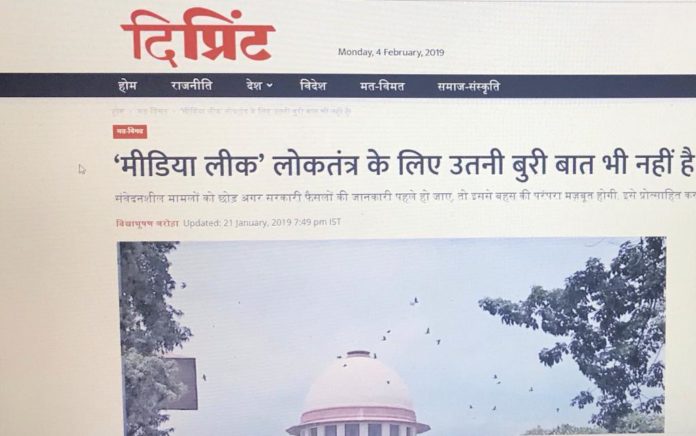 This columnist had written a piece for News Webportal the Print (Hindi) a few days back. Just thought to give here a free English rendering of the main points in the above mentioned article.

In a robust democracy, we should not evade a healthy debate. Barring sensitive matters, if the information about government decisions is given in advance, it would strengthen the tradition of debate and discussion. It should be encouraged.

Attributing to sources, there was a news-item in a major daily a few days ago which effectively meant that the members of the newly constituted collegium of the Supreme Court were miffed at the publication of the names of High Court Judges who were proposed to be elevated to the Supreme Court. Therefore, it reversed the decision taken by the earlier collegium and recommended two other names.

The said report also mentioned that some ‘fresh adverse material’ has also been received against those two Judges. The report however stressed mainly on ‘media leak’. About adverse material, the news-report again quotes the source as saying that disclosure of ‘adverse material’ relating to the dropped names is not likely to benefit any institution for any section of legal fraternity or the public at large.

There cannot be two opinions about it that if any information is made public without the consent of its authorised ‘custodian’, it is not only encroaching upon some one else’s turf but also not desirable for practical reasons as witnessed in this case (where the decision of elevating two judges was reversed just because of early leak of the proposed names).

But can a decision which was taken (and signed too) by five Judges of the Supreme Court be reversed just because it was leaked in Media before hand?

This columnist had been a part of  the government’s publicity machinery for many years and based on that experience, he would like to say that it is almost unheard of that a decision could be changed just because it was leaked in the media.

Even those who read newspapers cursorily, would recall that Newspapers and TV News Channels regularly keep mentioning the Cabinet decisions in advance and sometimes they seem to take pride in the fact that their advance information was correct. One has seen Cabinet Ministers getting upset occasionally on media leaks but there is no such incidence in our memory when a decision was reversed just because of a media leak.

Why should there be any objection to the leakage of some selected proposed decisions of the government? Again, this is with the usual caveat that there could be  some decisions, especially in economic arena, when early leakage of certain decisions may benefit some in the stock market. Therefore, no scrupulous officer would like to leak such information beforehand.

Is the possibility of constructive debates diminishing every day in the name of technical confidentiality? Although all governments characteristically prefer to keep the decision making process secret but the present NDA government seems to  be much more possesive about important decisions of the cabinet. Undoubtedly, this is as per the existing laws and conforming to the rules but practically such attitude ruthlessly crushes the possibility of a constructive exchange of views.

Recently, the decision to give 10% reservation to economically backward upper castes was kept under the wraps till the last moment as if it was a secret military operation. There were no deliberations at all about this decision. Without going into the merits or demerits of this decision, it can easily be said that though the process may be technically correct, it did not respect the robust democratic tradition of reaching a decision after due deliberations.

Therefore, in an atmosphere like this where level of transparency and public discourse is abysmally low, it is quite worrisome that through a planted news-item, a message from the highest quarters is being given that informal dissemination of any news would not be accepted. In fact, it was expected of the Courts that they would help bringing in transparency and openness, but this recent message (through the said news-item) would discourage those working for transparency and openness in the system.

Coming back to this news-item, it also mentions that some ‘adverse material’ has also been received against the two Judges included in the earlier proposal but the source does not give any details about this ‘adverse material’. We may perhaps legitimately ask whether it is justifiable to make a mention of ‘ fresh adverse material’ about two judges without giving any details?

So we will have to continue to debate which kind of media leak is correct and which is not.