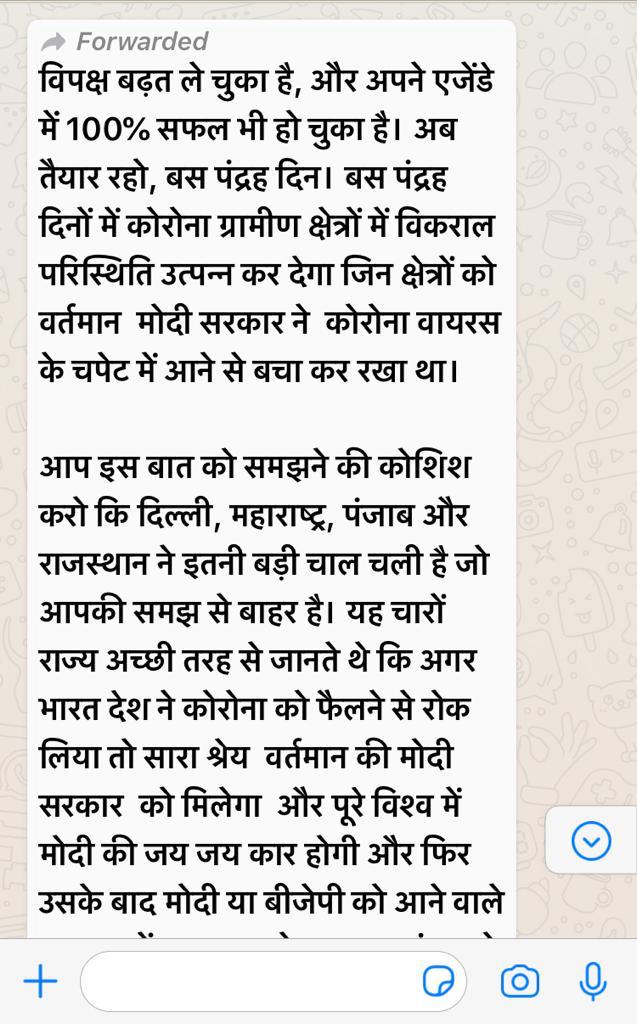 There is a strategy of keep lobbing grenades into the fault lines of society without any evidence and that will crowd out the actual news and will keep the people (experts and journalists included) busy with sifting the truth from the cesspool of misinformation and fake news.

Steve Bannon, the former head of Breitbart News and chief strategist for Donald Trump. reportedly said once, “The real opposition is the media. And the way to deal with them is to flood the zone with shit.” Vox magazine has talked of this “manufactured nihilism. ” This is a deliberate strategy to muddy the water.   “The issue for many people isn’t exactly a denial of truth as such. It’s more a growing weariness over the process of finding the truth at all. And that weariness leads more and more people to abandon the idea that the truth is knowable,” said Vox Magazine.  It is a strategy of keep lobbing grenades into the fault lines of society without any evidence and that will crowd out the actual news and will keep the people (experts and journalists included) busy with sifting the truth from the cesspool of misinformation and fake news.

If a narrative is becoming too troublesome, bring in  conspiracy theories, doesn’t matter if it has no evidential weight behind it. Start with innuendos – “How could so many people come to Anand Vihar in such a short time”  or “Who organized them to reach in such large number”. You are getting questions like, “How can anyone cover 1100 Km in 11 days” (overlooking the fact that the walking labourers got lift from passing vehicles for short distances). Or sample this “look at this woman with…she is the same one in the car” and sometimes shooting the messenger like this, “Media is bringing them by car to make their stories” or “look these pictures are not even from India”.  These stories get traction among the people who are so partisan in the most primitive way that conspiracy theories find very receptive audience. When trust in media and other institutions of authority is at all time low, it doesn’t take too much to muddy the waters. Since there is no incentive or premium for media for objective and nonpartisan reporting, the fake news thrives unchallenged.

Political News is no longer for general audience. It is for those who are invested and interested in politics. This needs a bit of elaboration and will be a subject of full-fledged post later. Earlier news was part of a monopoly info-entertainment package – DD, few newspapers and some magazines. News business was not burdened to find or create a new audience for news. Audience interested in sports, entertainment, films, Chitrahaar etc were per force obliged to be the consumer of news as it was part of the package. However, now news channels are just one type of ‘hobby channel’ amongst a sea of hobby channels serving other hobbies such as spirituality, wild life, music, films, history, general entertainment, cooking, or practically anything. Earlier, news was something for everybody, now, it is a deep thing for the most interested. People who are not interested in news, they simply go away as they have the choice of other hobby channels. Now the news channel has to appeal to the person who is a hard core news junkie and get more people to get interested in news. Burden of finding an audience is now on the news-carrier  that too in a backdrop of depleting advertisement revenue. To be interested in politics is to take sides. We get interested in politics which is a partisan field by definition not in the cold world of Political Science. For making people interested in their field, Political Journalists need to turn political interest into political identity as it is identity that creates a community, a team or a tribe. Nothing unites faster than focusing on enemy. Political journalism can no longer espouse the ideal of equidistant objectivism. Politics for hardcore politics junkies is all about taking sides. So every narrative has to per force hover around this persistent question – “Why my side is correct and why the other side is wrong”.

More importantly, media is getting the pulse of their audience in real time. This is different from earlier times when TRP and circulation numbers were the only source. Realtime analytics and software like Chartbeat have made journalism very intense and pressing job in a cut-throat environment which seems to suck your sensitivities out. A journalist needs not only readers but readers who share the story on social media. A reader has a social media identity and he is very aware and careful about his online persona. He or she wants to signal the ecosystem of followers about what she likes, what she endorses, what she is about and above all what she hates. In order to get a reader to tweet or share any story to her followers, a story simply can’t be quiet and objective. We don’t log into twitter or Facebook or go to YouTube to share a story which is just an objective fair story. It should be able to appeal to us; it should resonate with our values and help us in defeating our ‘enemies’. My tweets and my shares represent me, my identity, I should get something that is  identitarian – one that demarcates my tribe from their tribe. If a journalist provides me the stuff which suits my tribe’s narrative, then I don’t bother about the evidential robustness of her output. I am too willing to use her output for the benefit of my tribe against my ‘enemy’.

There is no doubt that migrant  workers’ crisis is just one of the challenges of the umbrella COVID crisis. That is why many people are not happy that this has become the defining story of this once in a life time type of crisis.  Why is this happening? Simply because this is newsworthy in the most exalted sense of the word. Newsworthy is what is loud, exceptional, outrageous and different but in real sense it should be ‘important’. There are many other important aspects of the Corona Crisis like medical preparedness, figures of testing, infections and deaths, extent of spread, precautions and vaccines among others.

However, this aspect of walking families in total despair has all the ingredients of the newsworthiness. It clearly ticks the aspect of being ‘important’ as it involves lives and in great number but it also is outrageous, loud, visually searing and saturated with emotions. And above all, it is man-made, where you can find an object to blame. Naturally, it will get more coverage than other aspects. If you are worried about the narrative, how will you counter this narrative? What can be more potent than the elements of ‘importance’ and ‘outrage’. It has to be a bigger outrage with enemy angle and those overpowering emotions i.e. hatred and fear. Talk about conspiracy with not so subtle tugs at the political identity of the already polarized audience along with dangers inherent in a situation of this magnitude, noise will gradually start crowding out the news.

Newsworthiness in today’s time of virality is what people are talking. As more such conspiracy theories and talks of divergent sufferings and motives among the labor class will fill social media, it will get to a critical mass where it will become newsworthy by definition of being talked about. Traditional media will be compelled to take note and legitimize this ‘shit filling the zone’ with coverage and expert treatment. Water will be muddied and mismanagement will not be that stark any longer.

Many are befuddled as to why the worker are leaving now when economy is about to open up again. Their arguments is simplistic – They say, labourers should keep calm and think rationally that they will spread the virus back in their villages and moreover, how the economy will be put back on track if they leave! What rubbish!!! World’s richest countries are witnessing hoarding of toilet papers, scientific community is not able to agree on the use of masks, affluent residential housing societies come to blows on the question allowing maids and newspapers in the premises. In this state of heightened irrationality, we accept that our labour class which has been completely abandoned for last two months without any safety nets, should display the most calm and lucid form of rationality which is far superior than the scientific community, share market and in many cases the government itself. I think it is not only naïve but intently malicious.

There simply cannot be any excuses for this purely man-made crisis. India has generally managed the situation pretty alright compared to many countries but the issue of unending sufferings of the migrant labourers is a crying shame and a mark of serious failure on the part of our civil and political leadership. No amount of spinning and muddying the water can cover the callous ineptitude of the governments – Centre or the State and also of the civil society.