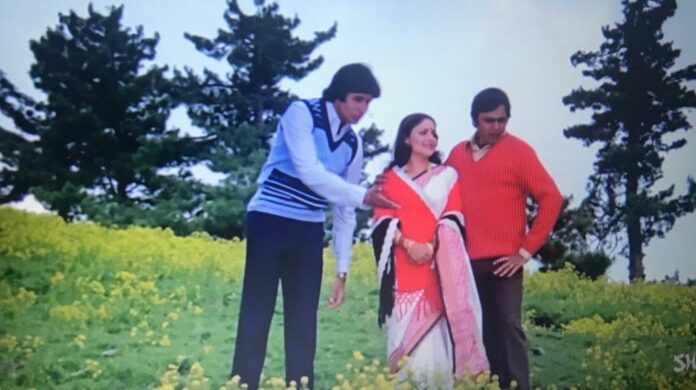 Such has been the turmoil in Kashmir for the past four decades that we have long forgotten that it used to be a place everybody longed to visit, at least once in a lifetime. And, why not? So enamoured was Emperor Jahangir of this place that he visited Srinagar at least three times during his reign, when it used to take the royal entourage no less than 200 days for a to and fro journey from Agra. Some of the gardens, or perhaps all gardens, were established by him.

In the early 60s and 70s when the country was just in its post-independent teens, there was romance in the air and every every actor/actress had to be in Kashmir to express love amongst flower beds, amidst the lake waters, and along the tree-lined avenues. I knew of poplars and chinars from such songs only.

Without doubt, कश्मीर की कली Is the first that comes to mind – both as a popular song and a hit film. Interestingly, both are unrelated – the song कश्मीर की कली हूँ में मुझसे न रूठो बाबुजी is from the film जंगली. But for film buffs, others can hardly draw such distinction. However, both films captured the beauty of the valley in camera. Shankar-Jaikishan’s composition from film ‘जंगली’, ये चांद सा रोशन चेहरा, ज़ुल्फ़ों का रंग सुनहरा; ये झील सी नीली आँखें, कोई राज़ है इनमें गहरा; तारीफ़ करूँ क्या उसकी, जिसने तुम्हें बनाया is best picturised to capture the beauty of Dal lake, and it has remained in our visual memory ever since.

OP Nayyar composed लाखों है निगाहों में, ज़िंदगी की राह में from the film फिर वही दिल लाया हूँ has romantic lyrics but was picturised as a tourist guide on what and where to go while in Srinagar. Another notable song shot in Kashmir पुकारता चला हूँ मैं from the film मेरे सनम was composed by OP Nayyar only. Even अच्छा तो हम चलते हैं फिर कब मिलोगे from आन मिलो सजना was set against the backdrop of the Dal lake, and remains popular.

‘जब जब फूल खिले is a romantic drama that has the origin of the story in Kashmir, or should I say on the ‘shikara’ only. Only in the later half, the script relocates it to a major city to demonstrate and address the so-called class difference. It was a big hit, with music composed by Kalyanji Anandji. ये समां, समां है ये प्यार का has retained its freshness, and has been suitably captured on the houseboat. Worth watching!

I think there is only one song that is totally focused on the beauty of Kashmir. With the hope that Kashmir returns to that romantic era once again, I leave you to enjoy Anand Bakshi-RD Burman’s composition from the film बेमिसाल…