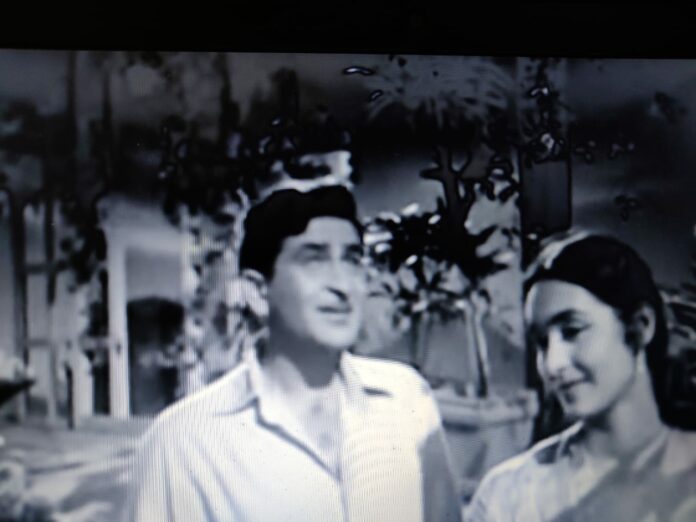 If there is anything worthwhile I am doing through my music notes, some readers say, is to erase the collective disrespect for songs as a frivolous pass time worthy of little attention. Songs are made up of words that match the mood in that moment, and are so arranged to reflect the situation in delivering feelings. Not all songs may fit this broad definition, but nonetheless several of them contribute to building ‘literature’ of a kind. Converting poetry into lyrical composition on musical notes is indeed a work of ‘art’.

At the end, songs are a product of a teamwork between lyricist, composer, singer and visualiser (or director). Interesting and somewhat surprising is to see how multi-talented persons would have agreed on an acceptable outcome. Let me pick on one of the formidable teams of the golden era to elaborate this aspect further, who worked together to create many lingering compositions. Shailendra, ShankarJaikishan and Raj Kapoor had created a distinct musical symphony of their own through many songs.

Although Shailendra did not live long (died in 1966, at the age of 43 only) to enthrall his fans, he was rated as one of the finest poets in the film industry. For his contributions to cinema, a postal stamp was issued on him in 2013 although he had passed away after producing/directing ‘Teesri Kasam’, a classic in its own right. Interesting is to note that even in those films in which Raj Kapoor had only acted, the trio worked to create the musical magic.

I would like to talk about film ‘Anari’ to take our narrative forward, although it is difficult to ignore ‘Teesi Kasam’ for its songs. Had Raj Kapoor not decided to engage Hrishikesh Mukherjee to direct his film, the noted editor-director would have returned back to Calcutta, as he found little incentive to be in Bombay.

That is just one bit of information, but important are the songs from the film. Although all songs from the film are popular, the one that is worth mentioning for its soft and subtle expressions is Mukesh-Lata rendered  दिल की नज़र से, नज़रों की दिल से; ये बात क्या है, ये राज़ क्या है कोई हमें बता दे. The communication between two lovers is as soft as it could be, but not without conveying acceptance of the inevitable in क्यों बेखबर, यूँ खिंची सी चली जा रही मैं, ये कौनसे बन्धनों में बंधी जा रही मैं.

Another notable aspect in poetry of those days was to locate humans as a part of nature, something which is curiously amiss in modern times. The presence of celestial bodies only enhanced the poetic expression – आकाश में, हो रहें हैं ये कैसे इशारे क्या, देखकर, आज हैं इतने खुश चाँद-तारे. One gets a feel of the totality of the situation in few verses, a literary masterpiece by all standards.