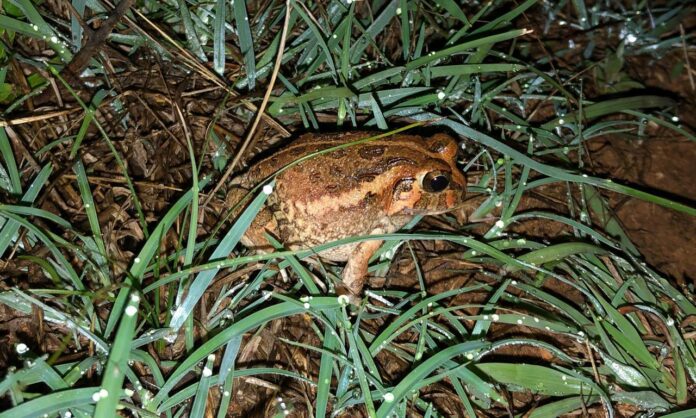 In a curious scientific development that could widen the knowledge of life systems and ecology, a  team of young scientists and mentored by veterans have found a new genus of burrowing frog species in the wet fields off Bangalore.

The finding of new species that recorded in New Zealand based reputed journal ‘ZOOTAXA’.

There are ten identified Sphaerotheca species in South Asia and the newfound frogs in the wet agricultural fields of Budumanahalli in North Bangalore are somewhat relatable to Sphaerotheca Paschima or Nasika Betracus Sahyadri species located at an aerial distance of about 700 km in the Western Ghats. These frogs were found in 2002 and are counted as the tenth valid Sphaerotheca species in scientific circles.

The scientists have so far observed about 30 the burrow digging Sphaerotheca frogs in Rajanukunte urban zone between September 2018 to October 2019. Since this new species is a genetically distinct lineage with a morphological character set distinguishable from congeners, they are recognized as the 11th Sphaerotheca species. Mr. Deepak, a Zoology lecturer in Mount Carmel’s College who spotted this new breed as part of his doctoral studies to document amphibians in the Deccan Plateau. He is also the first author of the article.

Since Deepak had trodden an uncharted territory of amphibian studies, he sought the involvement of established scientists like Dr. K P Dinesh, scientist Zoological Survey of India (ZSI), Dr. Kartik Shanker of Indian Institute of Science, and Annamarie Ohler of Sorbonne University  Paris. Retired directors Dr. Ramakrishna (ZSI) and Dr. Sanjappa of Biological Survey of  India played the role of his mentors.

Their collective studies between September 2018 and October 2019  received international recognition with the New Zealand journal accepting the claims of this discovery as the 11th valid Sphaerotheca genus.

Dr. Dinesh, the second author of the paper said that the presence of a new species of frogs in the outer Bangalore area highlights the lacunae in the amphibian studies of the dry Deccan Plateau zone in Karnataka and the subject was understudied compared to bio-diversity hotspot— the Western Ghats.

Dr. Ramakrishna, who retired as the Director of ZSI in Kolkata as part of this group was of the view that the burrow-making frogs are among the known cryptic species to live without any food for months and probably years beneath the earth’s surface.

Health in suburban area had suffered due to rapid urbanization and extinction of frogs in the area impacting the spread of mosquito-borne diseases.

One more area that is yet to register in the public mind is about the uses of frog-skins for treating severe burn injuries. Frog-skins are being used for grafting burnt areas in human beings in western countries.

This development could open up newer ways of skin grafting in India since the materials are readily available for grafting, Dr. Ramakrishna opined.

Discovery of this species is also importance from a bio-prospecting view. A follow-up study is required for assessing the presence or absence of a species in our ecology. “The discovery opens up the possibility for further studies for widening the vistas in multiple areas of human knowledge”, he Dr Ramakrishna remarked.

*M Chenna Nagaraj is a former Special Correspondent of United News of India (UNI). He is based in Delhi and Bangalore.

Banner Image : Provided by the author.