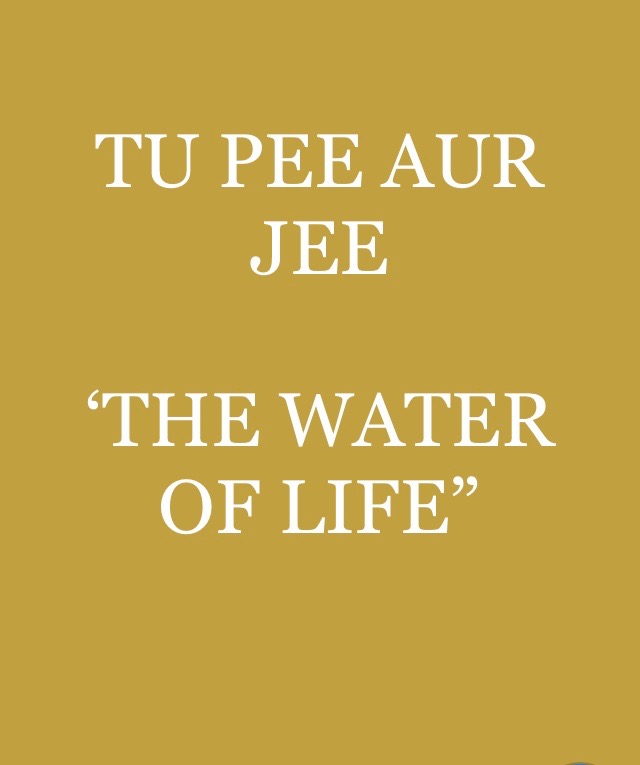 A century ago, a maverick British naturopath John W. Armstrong had cured himself by treating ‘on nothing but urine and tap water’ for 45 days.  In urine, he had discovered a system of alternate medicine that his family had long been practicing for treating minor stings and cuts, and which even the Bible prescribed: ‘drink waters out of thine own cistern, and running waters out of thine own well’. Much before all this, the Yogic and Ayurvedic texts had also prescribed urine therapy as a potent treatment.

In his hugely popular book ‘The Water of Life’, published in 1944, Armstrong had literally advised his readers not to be pissed off, but instead cajoled them ‘to pee aur jee‘. It gained credence with politicians and celebrities, as much with ordinary souls. While former Indian Prime Minister Morarji Desai added a political tinge to his own perfect medicine,  British actress Sarah Miles immunized herself against allergies for being on her own urine dose for over thirty years.

Having tasted thine own waters, Desai even went to the extent of suggesting pee to be the perfect medical solution for the millions of countrymen who could not afford medical treatment. Not without reason as Shivambu Kalpa, a treatise on the pharmaceutical value of urine, propounds it as an acceptable practice across several societies. With intended pun, celebrated author Khushwant Singh found pee silent in swimming pools, where its diluted presence could only be speculated.

Pee may be silent in psychology, as also in swimming, but not in the movie 3-Idiots. While providing apparent flow to the story, the very idea of innovation in the script is pitched around this universal saline excretion, which is a good conductor of electricity. Pee is so creatively woven into the script that for once the Hindi-challenged Chatur Ramalingam’s struggle to find a place for mutra-visarjan (urination) through the 180-minute entertainer doesn’t seem stupid.

Can pee trigger creativity in real life too? Not only in reel life, pee has its creative dimension in real life too. Not long ago, I was witness to a bizarre incident when my midnight travel from the railway station was punctuated at a traffic junction. A minor commotion ahead of my autorickshaw raised my curiosity and I soon learnt that branded liquor was being sold for a pittance at the road junction. Wow! The driver, however, cautioned me to avoid getting trapped into that late-night sale gimmick. Why?

Because it isn’t country liquor but fresh pee in a new bottle, being sold daily to unsuspecting clients at that traffic junction! After an initial shock, I could only laugh my way home. It may sound unethical but does it not speak volumes about the innovative survival strategy of those who are engaged in this skillful vocation? At least, our pee bottlers are not playing with the lives of their unsuspecting customers, offering them a time-tested medical solution instead. What if they had filled the bottle with cheap country liquor instead!