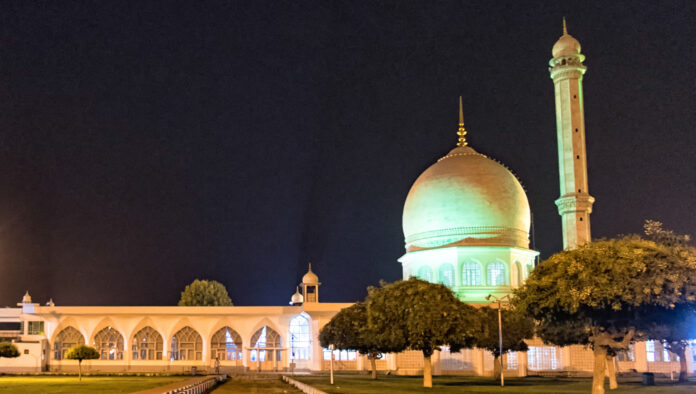 Journalists are witness to history being made. They write the first rough draft of history through their daily accounts of events which they go on revising periodically. The Hazratbal shrine siege in Srinagar was considered a turning point in the militancy situation in the state of Jammu and Kashmir. I was a witness to this historic event as Special Correspondent of the All India Radio in the State Capital.

Around mid-October 1993, we got the news that after receiving the specific piece of information, the BSF had cordoned off the Hazratbal shrine in Srinagar where several top militant commanders were hiding themselves. There were apprehensions that they could harm the holy relic of prophet Mohammed as two of the seven locks of the strongroom had been replaced.

Was something similar being attempted after 30 years, at the height of militancy? Worst apprehensions were being expressed and there was palpable tension in the air.  Could it be the militants’ plan to create a situation that the holy relic is harmed and the security forces get the blame? Militants had been taking shelter in the shrine complex knowing fully well that security forces would think many times before entering the shrine.

Therefore, the safety of the holy relic was an issue of utmost importance. Curfew was imposed in the area. Initial reports said about 40 militants including some top commanders were held up in the shrine complex.

BSF was soon replaced by the army units and the adjoining areas were evacuated. The Governor,  retired army chief, General KV Krishna Rao and civilian officers were holding constant meetings, obviously keeping the Centre in loop, and were discussing all possible scenarios.

Apart from the safety of the holy relic, there was also an issue of the safety of a large number of civilian devotees including women and children trapped inside the shrine. The Governor, General Rao and civilian officers wanted a negotiated solution to the problem to save the civilians. Kashmir Divisional Commissioner Wajahat Habibullah was given the onerous responsibility of engaging the militants and continue the negotiations with the militants till the strategy is finalised.

The army had disconnected water and electricity supplies to force the  militants to surrender. The militants, on their part, had taken position on the minaret of the shrine. They displayed their heavy weapons at times from behind the curtains they had installed. They hung wires to show that they could even blast the shrine using explosives if army tried to storm their hideouts.

Food ran short in the shrine. Authorities supplied food for the entrapped civilians but militants refused the supply saying they would permit food supply only from the Muslim Auqaf Trust, the management body of the shrine. This issue was resolved but stalemate continued..

In the meanwhile, protests against the cordoning off the shrine started throughout the Kashmir valley. In Bijbehara town a procession clashed with a BSF convoy passing through the town resulting in firing that left over 30 persons dead and over 50 injured.

There were clashes and killings at some other places also. Situation was getting more complex and prolonged.  In yet another incident the chief negotiator Habibullah and Governor’s Advisor General Zaki were seriously injured when their car tried to cross through a passing army convoy at a crossing and an army truck hit the car throwing it on to an electric pole on the footpath along the road.

AIR’s General News Room in New Delhi was repeatedly calling me to know the well-being of Mr Habibullah. Later I learnt that their sources in Delhi had told them that he could not survive the impact of the accident. But they were wrong. My sources in Srinagar were correct that he was critically injured and may survive. Now we all know that he recovered after a lengthy treatment and later rose to become the first Chief Information Commissioner of India.

Reverting to Hazarat Bal, media parties were taken to the shrine everyday at 3 PM when curfew was relaxed for two hours. On the way, I once saw even a marriage being solemnised during this period. Life is far larger than militancy or any thing.

Militants also knew about media visits and they would sometime come out of hiding and shout out their demands raising azadi slogans. That made news copy for the journalists. One day, a militant with covered face shouted that they would not deal with Brigadier SPS Tanwar as he being the Sub-Area Commander Srinagar was junior to the militant commanders inside the shrine several of whom were Area Commanders of their outfits. Obviously it was a weird demand but then we were not dealing with normal people here.

A woman devotee trapped inside the shrine, would go on rounds and rounds of the grassy ground encircling the shrine. She walked as if searching something. We conjectured that she may have been suffering from some kind of mental illness. One day after her quick paced stroll on the grassy ground, she suddenly dashed towards the small gate where journalists were gathered.

We all rushed towards her but army people made a cardon around her, took her some distance away where she wouldn’t be visible to the militants who could target her. They offered her a glass of water to calm her down out of her breathlessness. She became hysterical and cried, “Cigarette, cigarette”. She calmed down after several deep puffs of cigarettes offered by an army man.

She revealed that she had been frantically moving across the shrine grounds in search of butts of cigarettes. Her dashing out of the shrine was at the risk of her life but huge craving for cigarettes made her do that.

On another occasion, a  boy of about 16 years of age came out of the shrine and media persons almost pounced upon him. Someone lifted him on his shoulders, so that the camerapersons could take better shots of him. The boy looked visibly harassed as journalists bombarded him with questions regarding his name, who all else were inside and how he could come out. He spoke nothing. He was dumb and deaf. He was taken away by the police to hand him over to his family.

Some journalists came a bit late and asked what the boy said. On being told that he was dumb and deaf, they were so excited that this fact did not register with them and they still insisted, ” That is ok but what did he say?” Crazy people all the way, we thought.

Another interesting incident could be narrated here. A senior officer from our service, Sahab Singh, was posted in the Press Information Bureau (PIB) of Srinagar those days.  Though he was staying at the Circuit House but would usually be with me during the day. Once he came and said that evening papers in Delhi said that the Hazratbal imbroglio was over as the army had stormed the shrine. Details of the army units and their commanding officers were also given. It was a case of somebody jumping the guns.

Diwali festival was approaching and journalists from outside left for their homes and did not expect anything too soon. I also wanted to go home to Jammu to be with my family on the occasion of Diwali. D.C. Bhowmick was our Director General of News in New Delhi at that time. Very soft-spoken and helpful. But when I put forth my request for leave, he wouldn’t permit. I was surprised, but then he confided in me that something important is expected within few days, and we should not be found missing from the post.  I had to stay.

On one of those days, as per my routine, I rang up DG Police M.N.Sabharwal at around 9 PM to check up the last time  for the day if anything new-worthy was there. He was not at home. Since his wife knew me as a government media person, she volunteered the information that he had just gone towards the shrine.

To the shrine at that late hour? What was happening? I requested her to ask DG Sahab to give me a ring as and when he returned, even if it is very late. DG’s call came at about 5 AM. It was the call I had waited for over a month. The militants had surrendered.

But how to pass on this exclusive news to GNR of All India Radio at Delhi. Not only STD was not working, even ‘trunk-call booking’ system was not functional. I rang up the General Manager of Telecom at that odd hour and broke the news that militants had surrendered, and I wanted to make some urgent calls to Delhi. He must have jumped out of his bed and wanted details. He noted down my number and promised as many quick calls as I wanted. The operator came on line within a minute and continued overhearing everything I passed on and at times, the operator asked for additional details. I thought, he is fully enjoying his position of telephone operator and taking his pound of flesh. Anyway, I first gave all the information to GNR and then to our DG, Bhowmick. I thanked him for refusing me the leave for Diwali. After that, all calls came from Delhi.  6 AM  bulletin series led  with the story. The story was revised for 0800 hours bulletin series with more details and voice-casts.

I was thrilled with the morning commentary that followed the news bulletins. It was titled “Surrender at Last” and was written by another veteran of our service, S.C.Bhat, the former Director of News.

Local journalists almost jammed my phone, first grudging for my not sharing the news and then congratulating for my exclusive. Bhowmick later told me that Information and Broadcasting minister KP Singhdeo also wanted to speak to me.  I got no ring from minister but got an appreciation letter from Bhowmick.

Five years after the incident the situation had improved a lot with holding of the Assembly and the Lok Sabha elections, at an impromptu meeting with the Governor at his farewell, I asked General KV Krishna Rao about the most significant event of his tenure. He nonchalantly remarked it was the Hazratbal shrine episode.

“It punctured the heroic image of the militants being the freedom fighters when they meekly surrendered to the security forces. They lost public support and soon started fighting among themselves. People called them hungry fox who couldn’t stand hunger for a few days. Militancy soon degenerated into all sorts of crimes. People started cooperating with the administration”, he added for good effect.

*Writer Ajeet Singh was AIR’s correspondent in Jammu and Kashmir for over 19 years.  He retired as   Director of News, Doordarshan, Hisar.

Banner Image Credit : From the Official Website of Department of Tourism, Govt of J & K