Under the Lens Satellite broadband internet: a new ghost in the town 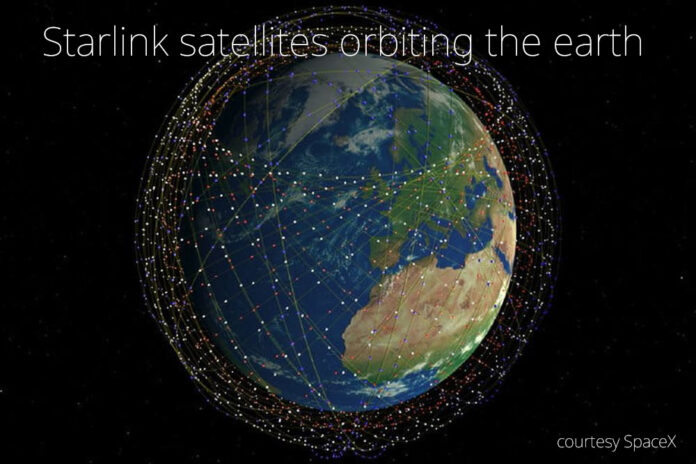 We are so used to the internet that we don’t realise how much effort goes in the background for bringing a message or photo to our devices. Similarly, we have satellite television in almost every home, making us believe that it is just a TV programme being made somewhere and beamed to us through a satellite, like a torch beam.

But it is not that simple.

When it comes to providing internet the way television signals come to homes, the technology becomes much more difficult and expensive, and it opens a range of new possibilities. So, let us revise our understanding of communication technologies a bit before we talk about the ghost.

How does satellite internet work?

There are thousands of man-made satellites orbiting the earth, and depending upon their location in the space and technical payload that they carry, they help humans in navigation (e.g. providing GPS/map services), weather updates and alerts, telecommunication (e.g. radio, telephony and television), remote-sensing (e.g. in exploration of natural resources), military actions (e.g. locating enemy resources, guiding aircraft and missiles), and so on.

Talking of the internet, it is a network of computers world-wide. For connecting computers, and managing traffic and associated controls, there is a global network of massive cables running underground, and through seas and oceans. This, called ‘backbone’, is what transmits most of the data between devices connected with the internet.

For an internet connection to work, two-way transmission of data needs to take place between the connected devices. And that makes it much trickier than one-way communication through satellites. Consider that the mirror (in the above simile of television transmission) now also has to reflect signals from the home dish back to the dish of the computer that is connected with that computer. But we cannot have sophisticated and large-sized technical infrastructure at each receiving location, so there also have to be earth stations to deal with the reverse flow of data.

Geo-stationary satellites, so useful for communication, are large and too far from the earth (about 36,000 km above the surface). Each of them is very expensive but has a limit on data transmisdion that it can handle. Besides, waves travelling from the earth to the satellite and back twice (remember, internet is a two-way communication?) causes latency (=delayed reception) in internet communication.

Low Earth Orbit (LEO) satellites provide a much better alternative for providing broadband internet through satellites. In the last few years, a large number of small satellites have been launched in low earth orbits – orbits that lie from a few hundred kilometres to about a thousand km. These satellites can provide fast internet and without latency in transmission. However, being closer to the earth, their range is small. Therefore, a constellation of many satellites is required to provide satisfactory internet services in a large area.

The rise of satellite broadband internet

Satellite internet has a great promise: it can reach places where wired internet is difficult to reach. Remote land locations, oceans, moving objects, destruction of cables due to a disaster, secret military and intelligence spots – there are many such places where satellite internet scores greatly over the wired one. In addition, it can provide a backup source of internet for essential services.

In recent years, technology has taken a big leap and satellite internet has become commercially viable, at least in remote locations and for critical applications. In the USA, two companies cover about 99% of the total land area with satellite broadband, based on LEO satellites. Even India-born Bharti Global has about 700 satellites in its kitty and boasts of satellite broadband capability in a number of countries.

However, due to various factors (e.g. distances, environmental factors, technological limitations), it has not been possible so far to make satellite internet even a fraction as sturdy and dependable as the terrestrial one. In addition, it is very expensive.

Recently, SpaceX announced that its services have reached Antarctica, thus covering all the seven continents. This makes it possible to have a broadband connection in such a remote location where reaching broadband through sea cables is very difficult and expensive.

SpaceX plans to launch 12,000 satellites in a few years, with an option to take the number to 42,000. By all standards, that is an extremely large number of objects orbiting at a nearly-uniform distance from the earth. Consider that there are just about 3,000 working man-made satellites launched by all the countries put together, other than those launched under Starlink.

SpaceX/ Starlink has already become a near-monopoly in providing satellite services to long-distance air transport and shipping industries. Some mobile companies have partnered with SpaceX for making internet available in ‘dead zones’. Some African and South East Asian nations, which have problems in laying massive cables, have approached SpaceX for satellite broadband services.

It looks so promising. Where is the ghost?

Many observers are apprehensive about the way technology and money-power are concentrated in the space internet industry. They point towards a few big companies – and only one, SpaceX, in some regions – that provide this service, and most are concentrated in the US. Their first-mover advantage and size create a big barrier for other companies to enter this field, especially from developing countries.

But that was just one reason to feel threatened.

Such a large number of satellites is causing clutter in space surrounding the earth. When thousands of satellites orbit the earth, it is not unlikely that if for some reason (e.g. electromagnetic storms), their controls go haywire, they may collide. There is also a possibility of space wars, or at least space conflicts, happening in the near future in which nations target their enemy nations’ satellites. In such scenarios, the more satellites in space, the higher is the likelihood of their crashes and collisions, debris falling on the earth, and essential services stopping.

This concern is not new. Half a century back, a scientist named Kessler had proposed that if the density of LEO satellites goes higher than a critical level, a few collisions could lead to a cascading effect, resulting in a series of collisions. In his conclusion four decades later, he reiterated his apprehension and said that the floating debris could create space pollution and also disrupt future space activities.

Environmental scientists point towards the enormous space debris that such a large number of satellites create. SpaceX claims to be burning up unusable satellites in space itself, thus not creating debris in space or falling on the ground. But scientists are not convinced with such a measure, calling it insufficient.

Astronomers have a difficult time when there are numerous objects surrounding the earth. Their top international body raised an alert when three years back SpaceX started sending dozens of satellites in successive rocket launches. SpaceX has tried to assuage their concerns to some extent by making satellite surfaces non-reflective for sunlight. However, for exploration of outer space, astronomers now use radio waves more than the normal light, and the paths of such waves are not only prone to disturbance by such objects but their frequencies can also come in conflict with satellites’ communication frequencies.

The consideration that prompted this article, is the likely dominance of a few countries over skies. This raises concerns on one hand about national security and on the other hand about possible arm-twisting by the nations that have control over this technology. In addition, its indiscriminate use may have serious consequences.

Let me recall some recent incidents to support my concerns.

American defence outfits are supposed to be in close coordination with SpaceX for their security and surveillance operations beyond their boundaries. That puts the US in a much more advantageous position than other nations. That cannot be considered healthy for Global balance of power.

During the Ukraine war of 2022, when internet was not available in that country due to jamming and destruction of terrestrial facilities by Russia, SpaceX provided (and has been providing as of now) internet to its military through Starlink. This has allowed Ukrainian forces to use the internet for coordination among moving troops and the artillery, and other operations. Even if you feel that Russia is at fault in this war, such selective and partisan involvement of facilities of a third country during wars is not desirable, no?

Some months back, a Chinese defence paper argued for destroying Starlink because of its military capabilities. The Russian space agency had earlier raised a red flag about Starlink’s capabilities beyond the stated objective of providing broadband services and Musk’s strong pro-American bias.

During the ongoing (in September 2022) protests in Iran, the authorities have blocked the internet in violence-affected parts of the country. Elon Musk has taken pains to seek American governmental approval so as to provide internet in such areas. (The approval is needed because the US has imposed sanctions against Iran.) If you feel that providing internet services to protesters supports their fundamental right of speech, you are overlooking the underlying danger in such selective facilitation. In many situations the line is very hazy between the right and the wrong. Then, would Musk do the same in case similar protests happen in an American ally nation?

Please bear in mind that this is just the beginning, because SpaceX/ Starlink is not yet omnipotent and omnipresent, but it will soon be.

There are many areas in which concentration of technology and capital is threatening to create new types of economic disparities, and satellite internet is not the biggest of them. Yet, it has the potential to multiply the power of those already powerful. Do you see the ghost?