विशेष Thank you Nathuram! You adorned Mahatma with the coveted Martyrdom 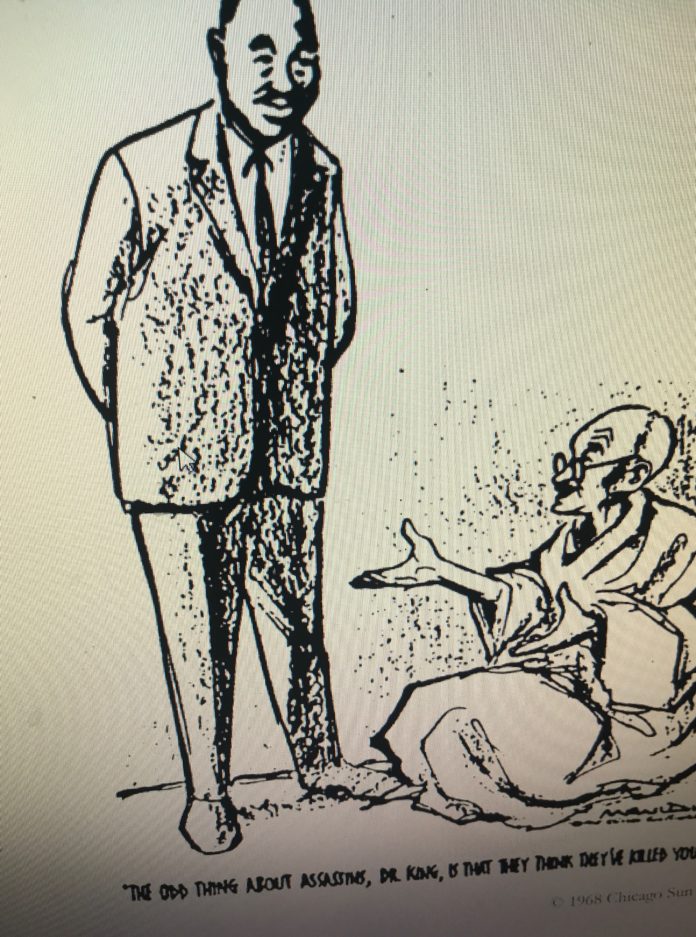 “The odd thing about assassins, Dr. King, is that they think they have killed you” – A Bill Mauldin cartoon in The Chicago Sun Times – Gandhi talking to Dr. Martin Luther King Jr just after the latter was assassinated in 1968.

I wanted to meet you before you were actually hanged.  It didn’t happen.  Believe this letter reaches you through the scores of your feelers in whose voice and emotions you still exist, making them believe you did a great ‘Sisupal–vadh’ for nation’s pride.

I regret you were handed down with capital punishment, for, as a brother, as a fellow of this large family of Mother India, it pains me to see my own brother die heinously.  Even Bapu would not have agreed to your hanging. After all, he was a prophet of love, even if you hadn’t accepted him as the ‘Father of the Nation’. Moreover, you deserved his forgiveness because of the one good thing you did to him.

Nathu, I know, even you didn’t believe that Gandhi was that kind of a person to be consigned at the altar of Nation’s pride. The fact would not have faded away from your memory, that Gandhi invited you for a meeting even after you attempted to stab him, in 1944 and B R Bhisare, the Ex MLA of Mahabaleshwar intervened and snatched the dagger from your hands.  Why should he call you, if he had not held you as one of his brethren?  He could as well have asked the government to arrest you for criminal attempt, isn’t it?

Still you kept nurturing hate.  In fact, if you quietly ponder, you would realize it was your foiled attempt and the wounded ego that prompted you to venture again and again to finish him off.

Let me remind you of the venom of your wounded psyche.  When Gandhi stated, in one of his prayer meetings in 1946, “So far I have been saved from seven attempts on my life. But I am not going to end up that way. I hope to live for 125 years,” did you, Nathu, not retort in your journal ‘Agrani’ saying “but, who will let you live?”

You blamed Gandhi for partition, while knowing very well that the pioneer of the conception of two nations was none other than your Guru Swatantraya Vir Savarkar.  Did he not write repeatedly that ‘Hindus and Muslims were two nations’ as early as 1937?  Here are his words that nourished you to what you were to become:

“India cannot be assumed today to be a unitarian and homogenous nation, but on the contrary there are two nations in the main—the Hindus and the Muslims.” (Samagra Savarkar Wangmaya: Writings of Swatantrya Veer Savarkar Vol. VI, p. 296, Maharastra Prantiya Hindu Mahasabha, Poona.)

Did you and your guru not write that ‘this is our (Hindu) land and they (mohammadians) are aliens’, and spread the poison of hatred among innocent masses over years and prepared them for the ill fated division and the ensuing bloodshed?

And how on earth you claim to believe that ‘Gandhi was the architect of partition’ when he, on account of his successful effort to build peace between the Hindus and Muslims, was termed as ‘One man army’? I don’t find the logic.  (Gandhi who was termed as ‘one man army’ by Mountbatten for he could contain killings of Hindus by Muslims in Novakhali where as the whole British Army could not contain communal pogrom in Punjab and Sindh).

You accuse ‘Gandhi for asking Indian Government to give 55 crore rupees to Pakistan which was waging a proxy war with India (in Kashmir)’ and stated that as one of the reasons for killing him.  Don’t you realize this accusation has an element of anachronism?  There was no question of 55 crore in 1946, even then you went behind him to kill by derailing his train.  You just wanted to eliminate him, just because he called for a composite nation, a stand point negating your Guru’s dream of ‘homogeneous’ nation.

You are intelligent enough to realize that your Gandhi ‘vadh’ was a ‘weaker than thou’ statement, as you extinguished a person who had no defense, whose sworn nonviolent life didn’t permit him of physical defense against any personal violence.

Ideologically, Gandhi was waging a spiritual (super-ego) fight against which you down geared yourself to give an id-ego response through the barrels.  You could not digest that people particularly Hindus listened to him rather than listening to your kind of hegemonic people who called themselves nationalists. You felt defeated by him. Your act of ‘vadh’ was indeed a confessional statement of you being emasculated.

Nathu, you have Ram in your name; Ramayana does not permit fighting between unequals, you killed a man who had no weapon to defend against your armed attack.  If that was you, then that ‘you’ has no Ram in him.  That ‘you’ proves the fact:

However, this is not the purpose of my writing to you, my brother.  In your miscalculation you have indeed done a historical contribution.

History tells us that, the messages of great men gained greater reach when they delivered those messages through their own martyrdom.  Christ lives through his message primarily because of his crucifixion. Socrates to Martin Luther King, you find hundreds of contributors to human civilization gaining eternal relevance, through martyrdom.

Gandhi spoke of a society that has as its foundation Truth and Nonviolence, the eternal values.  You have given that eternity to his principles of Satyagraha and Sarvodaya too by adorning on him the crown of Martyr.  I just wanted to thank you for that.

My only worry is, my brother, your continued justification of your misdeed has spawn a lot of ‘Godse’ propensity in the country; when they find no more Mahatma to bestow martyrdom, they choose common men and women as their victims, all in the name of nation’s pride.  Please tell them to get to reason.

The author can be contacted at djohnchelladurai@gmail.com