Under the Lens How Many Planets Are There In Our Solar System – 8... 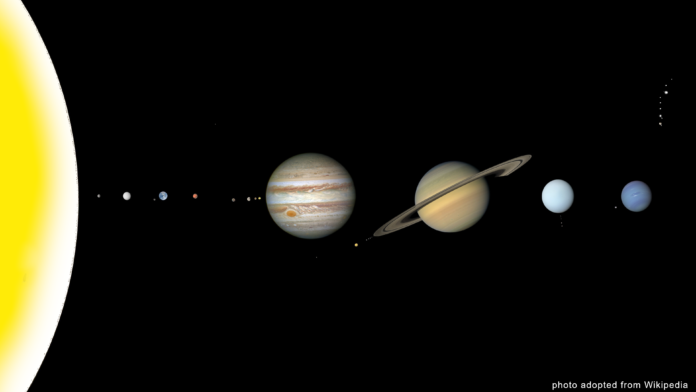 For some days since last Friday (24 Jun, 2022), people in many parts of the world are able to see five planets in a row in the early morning sky, with the naked eye. Not only that, the planets are aligned according to the distance of their orbits from the Sun. With a telescope, you can see even the two distant planets, Uranus and Neptune. This is a rare sight that comes once in 18 years. So, what could be a better time to update ourselves on the number of planets revolving around the Sun?

For those of us who studied the solar system in our school books 15 years back or earlier, nine planets are etched in our mind. Indians have also been exposed to this number as ‘nava grahas’ or nine planets are a core concept in Hindu astrology and religious practices.

Astronomers have been a shaky lot all through human history. We shall later talk about the ancient ones – who did not have telescopes and other modern tools – and can be forgiven for sometimes making crazy inferences, but look at the wobbly ‘modern’ astronomers faltering even in deciding how many planets circle around the Sun!

Around the end of the 18th century, it was believed that there were seven planets – Mercury, Venus, Earth, Mars, Jupiter, Saturn and Uranus. The ‘secondary planets’ that revolved around other planets – such as our Moon – were later called satellites.

For many decades since then, astronomers kept on finding small bodies revolving around the sun. These were sometimes called planets, then minor planets and then asteroids.

In 1930, they discovered Pluto. It was much bigger than most asteroids (celestial bodies that are smaller than the major planets, but, like planets, they revolve around the Sun). In many respects it looked like a planet. Thus, it was given the status of a major planet. The total number of major planets (that took away asteroids or small bodies revolving around the sun) thus became nine.

However, all through these years, Pluto was suspect in many an astronomer’s eye. It was dubbed as a satellite of Neptune, which had escaped the planet; it was even called a comet. Interestingly, a few more bodies like Pluto were discovered and the number of major planets at one time went up to 11.

Until 2006, astronomers were not unanimous about what could be definitively called a planet. It also happened that many thousand bodies similar to Pluto had been discovered orbiting the Sun in a belt beyond Neptune, called the Kuiper belt.

After a series of deliberations, the International Astronomical Union came to a consensus in 2006 to define planets and other lesser celestial bodies. Now, eight bodies with some common astronomical features – Mercury, Venus, Earth, Mars, Jupiter, Saturn, Uranus and Neptune – are called planets. Pluto and some other bodies that do not meet all the required criteria have been assigned the status of ‘dwarf planets’.

As of today, though the consensus is on the solar system having eight planets, some scientists still consider Pluto as a planet. Some insist on calling the main dwarf planets as planets. If you go by them, there are 12 or 13 planets revolving around the Sun. There are also some who believe that there is a planet near the Kuiper belt, and they call the elusive planet as Planet X.

It also looks interesting that at least 19 satellites of planets are nearly as big as, or bigger than, the smallest planets.

What were the ‘nava grahas’ mentioned in ancient Indian scriptures?

I earlier mentioned nava grahas or nine planets. It is now known that the concept of grahas in India during Vedic period was the celestial bodies that were special and different from distant stars. They naturally included the Sun (Aditya, Ravi) and Moon (Soma, Chandra) and the five planets that can be observed with the naked eye: Mangal (Mars), Budh (Mercury), Brihaspati (Jupiter), Shukr (Venus) and Shani (Saturn). These seven grahas were also assigned to the seven days of the week. The two nodes of the Moon – that are seen as the solar and lunar eclipse from the earth – were also given the status of grahas (Rahu, Ketu).

The movement of these grahas was initially observed in relation to the Earth, and thus the Earth was supposed to be static while grahas moved (around it). Observations many centuries later in India and other parts of the world led to their own heliocentric theories, which established that it was the Sun around which different planets revolved.

Ancient Indian astronomers seemed to be clear about the planetary movements. Some renowned astronomers – notably,  Aryabhatta, Brahmagupta, Varahamihira, Bhaskara and Lalla – had such mastery over astronomy that they could calculate planetary movements with great precision. Since there was seldom a conflict between religion and science, the concept of nava grahas continued alongside advanced astronomical discoveries, as they served different purposes.

Why are there only these many large planets in the solar system?

Did this question ever come to your mind: Why does the solar system not have many more planets?

All the planets of our solar system were created by condensation of space dust, bursts of matter being spewed by a hot Sun, and space debris from outer space flying into the solar system. The eight celestial bodies that are now called planets and some of their satellites became large enough to get a round shape (due to their own gravity) and they cleared space debris around them by pulling the debris into themselves.

Jupiter was one of the first planets to form in our solar system. It was quite big from the beginning and its gravitational pull gobbled up rocks that ‘floated’ all around it, and then it started eating up bigger celestial bodies that were sort of baby planets. The gobbling up of small ‘planets’ by Jupiter has been corroborated by recent research carried out through probes sent to Jupiter.

It is also believed that Mars and the Earth formed when huge rocky bodies collided with each other. Moon was probably formed when a huge celestial body collided with the Earth. Many satellites of Jupiter and Saturn seem to have a similar violent origin.

But then things settled – almost. The natural forces dictate that planets do not come too close to each other, or they would collide. Similarly, as the Sun’s gravitational pull cannot hold objects too far from it, there is a limit on how far a planet can be from the Sun. Such pulls-and-pushes of the cosmic world gave rise to a rather stable solar system, and it has remained so for billions of years. However, new studies, at least one of which is based on simulation, suggest that our solar system is still undergoing the same tribulations that led to formation of planets and their alignments. Even if that happens tomorrow, you and I need not worry because in astronomy, tomorrow comes after some thousand, even million, years!

The Story of Astronomy in India