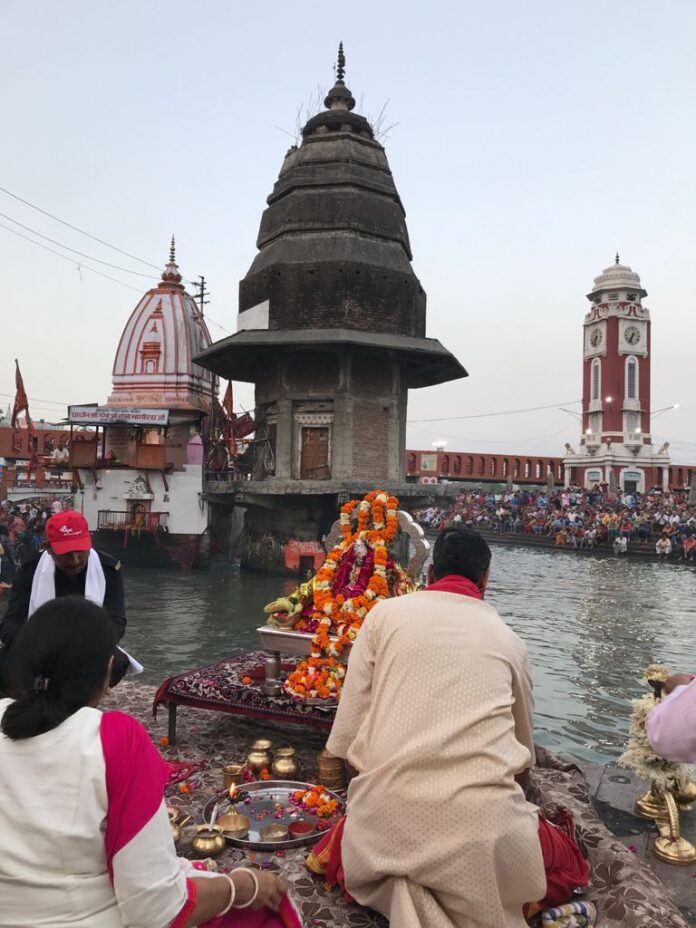 Many things in our lifetime happen many times over, but Death happens only once, so why not die gracefully in style. Remember, the journey from birth to death is just a short one as compared to the unknown and mysterious journey after death, from the embodied state to the disembodied state. The greedy priests, however, mercilessly exploit even this passage. What a pity!

After leading a satisfied and happy life, Lallan’s wife expired in Mirzapur, a city famous for carpet Industry in India. Within a few hours after cremation, she became a mass of scorching white ash. Instead of performing her last rites in Mirzapur itself, family elders, steeped in medieval mindset with regressive outlook, decided to perform her last rite at Haridwar (dwar meaning gate; Hari meaning the Lord). It is also famously called the ‘departure lounge’ for heaven or hell-bound departed souls’.

Lallan, however, didn’t know that, at Haridwar, he would encounter a horrific religious charade, which would surpass even a broad daylight heist. Immediately on arrival, a horde of pandas pounced upon him with alarming alacrity, to snatch the urn containing his wife’s ashes. The pretext was to place it on a pavitra asthaan (sanctified place) built especially for this purpose, lest it touched the ground and became apavitra.

Thereafter, he was escorted to a mahant (head priest) to decide the type of puja to be performed for the salvation of the departed soul. Claiming to have been bestowed with divine authority, the mahant decided the amount of dakshina for performing a special puja for making adequate ‘travel arrangements’ for the soul’s safe passage to heaven.

The higher the dakshina, the faster was the soul’s transportation by jumping the queue. Lesser the amount, longer the waiting time for the soul to go to heaven or hell, or worse to wilderness if someone couldn’t afford to pay the exorbitant extortion. Thus terrorized, the hapless kin had no option but to succumb to the diktats of these thugs.

Having performed the last rite, Lallan was happy that he had secured a place for his wife in the heaven. He was wrong. The rite performed at Haridwar was not the last, but the first-of-the-last rite. There was a second-of-the-last rite which was to be performed in Mirzapur, on the 4th or the 14th day of the cremation.

Back home, the family priest, known for his shenanigans, was waiting to perform the second-of-the-last rite. While in the first-of-the-last rite, the priest at Haridwar had transported his wife’s soul to heaven by extracting a hefty dakshina, the family priest was waiting to extract his pound of flesh for ‘furnishing’ the heavenly abode of his wife to enjoy a comfortable living.

Without any qualms, the priest dictated the long list of items which his wife was fond of. These included her favourite dresses, including branded undergarments; a dinner set along with cutlery; one double-bed with mattress, pillows, quilt and a bedsheet; a dressing table and the cute gold-plated little box wherein she kept vermilion; one dozen red bangles plus some perfume cans.

The chicanery is, as told convincingly by him, that all these items would be delivered to her after he performs the puja and takes away these items along with him.

Lallan thought that mercifully the extortion drama was finally over, but he was wrong once again. The priest told him not to forget the third-of-the-last rite to be performed by observing the Shradh, year after year, remembering and honouring the loved ones who are long dead.

(Unlike the fortnight-long Shradh ceremony observed in India, the entire population of Mexico, a Latin American country, pay respects to their dead relatives, only just one day in a year. This is called ‘The Day of the Dead’. They believe that the ‘Gateway for the Dead’ opens only on this day. Residents of Zapotnalejo, a Mexican city, have even erected a 20-metre-high statue of a deity ‘La Catrina’ to celebrate the ‘D of the D’.)

By now thoroughly disillusioned and disgusted, Lallan asked the priest curtly, “When the hell would this series of rites end”?

The priest replied rather light-heartedly, “My dear, it is an unending ritual; the series of the rites of the dead starts even before they are born. That is the first-of-the-first–rite. It was performed before your wife’s birth, in the seventh month of her mother’s pregnancy. Of course, how could you know about it?”

And that was the first rite, which was rightly celebrated with fanfare and festivities. It is the only BirthRite.

Have a wager, and you will win – God is, undoubtedly, in cahoots with priests.