Under the Lens A bird that flies from one pole to the other to greet... 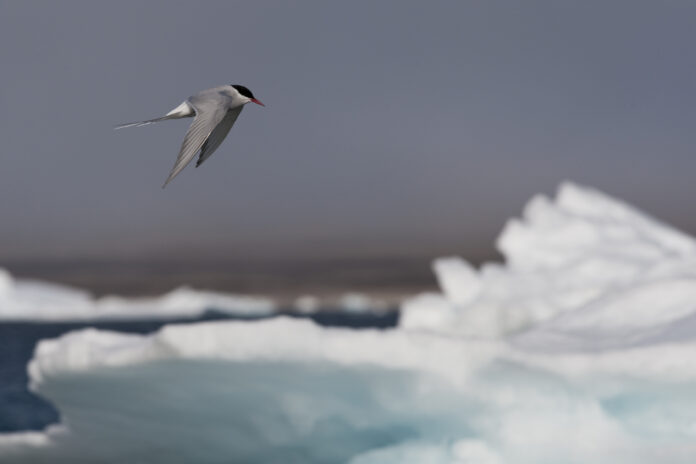 Migration among animals is common, and more so among birds. Every winter, India is visited by birds from the far north. Some of them cover thousands of kilometres one way!

But none of them beats this migratory bird – Arctic tern.

Arctic tern has a rather long life of 20 to 30 years. Its first migratory flight starts just three months after birth and it flies around the globe year after year. This bird lays eggs and nests in the Arctic and sub-Arctic regions, which include sea shores of Greenland, the Netherlands, Iceland, Canada and Alaska. Then it decides to fly far south – to the Antarctic continent where it winters for a few months.

If these birds flew straight north-south, the round-trip would be about 40,000 km. However, they wander a lot in east-west direction and sometimes take circuitous routes. For example, birds nesting in Greenland cover 71,000 km in one round-trip, and those nesting in the Netherlands cover 90,000 km, on average. In one recorded case from 2016, a bird came back to its earlier location after flying 96,000 km.

In its lifetime, this little bird of 100 gm (equal to a small soap-bar in weight) travels 2.4 million km. This is equal to seven-times the distance from the earth to the moon; from Indians’ perspective, it is as much as one thousand trips from Srinagar to Kanya Kumari!

Arctic terns’ southward journey takes about three months while they cover the return trip in half the time, riding on favourable winds.

By choosing to remain in the polar regions during their respective summers – when there is sunlight for almost 24 hours – Arctic terns are also unique in that they enjoy almost continuous sunlight of months twice in a year!  This abundance of sunlight ensures a copious supply of food for thousands of birds in these lands, which in the rest of the year have very low biological activity.

Now that we are talking about peculiarities of this bird, let us have a look at their interesting mating behaviour. During the breeding season, the male proposes to a female with the offer of fish that it carries in his beak. If the female accepts the offer, it nods. The male reciprocates, and after a few more dating formalities, they fly, circling each other. Once their allegiance is fixed, they together select a site and settle there for some days, during which the male feeds the female. Past mating, the bird lays one to three eggs. The male aggressively defends the female and the young chicks from other birds and predators. He even shares incubation duties.

So protective are the birds about their nest that they chase away predators by hitting them hard with their beaks and covering them with droppings. Humans approaching their nests also meet the same fate.

Both parents feed and take care of chicks for over a month. For the next two months, they have fun while the chicks are weaned and made to fend for themselves. Then they prepare themselves for their long journey south. For a week or so before the start of the journey, these highly cacophonous birds go quiet. Immediate family and friends gather and decide to fly together. The young ones are just about three months old when they undertake their first marathon flight.

How can these birds fly so far without losing direction?

Bird migration has been studied for decades. Of late, remote sensing and tracking technologies, and controlled experiments, have helped in finding how birds navigate their way. However, the puzzle of how birds can fly such long distance, with a good level of precision, has not been fully deciphered yet.

One important biological tool that guides birds in long-distance navigation is found to be a type of protein that can align itself with the earth’s magnetic field. This protein is found in birds’ eyes and acts as a biological compass.

Some photo-chemical reactions in birds’ eyes is also found to be helping birds fly in particular directions based on the sun’s location in the sky over long periods.

Of course, visual clues and the experience of the elders in the group help. At night, stars are also supposed to be guiding them in navigation.

Arctic terns have been found to make use of onshore landmarks, especially for stop-overs. However, their nesting as well as wintering lands are snow-clad, and it is near impossible to find specific clues to locations based just on sight and memory.

Moreover, Arctic terns are known to fly long distances over oceans, where there are no landmarks to depend on. For such birds, their sense of smell seems to play a significant role in navigation over oceans.

It is believed that not one but a number of clues and biochemical reactions in birds’ bodies helps them choose directions and locate places. Perhaps it is also the sum total of the sense of the leaders in the group. And, like most biological systems, these are liable to fail – and some flocks of birds have been found to lose their way and land in new locations.

On the related question – how are these birds able to fly so long distances – many things favour the Arctic tern, besides their small body weight and favourable wingspan.

Arctic terns have been found to make good use of winds, so much so that at times they can glide on a wind for long distances, without spending any energy. They can feed on the go, and sleep in flight. They can fly many hundred kilometres a day, non-stop, when conditions are favourable.

For re-fuelling themselves, they also break journey and can choose to stay in food-rich areas for many days.

So, the birds are quite well equipped for long-distance flights, and their survival rate is appreciably high.

Why has the Arctic tern chosen to migrate this distance?

Long-distance travels can be risky, even for humans. When you have to take a round-trip of the planet, the risks can be enormous.

In the case of Arctic tern, the travel – year after year for the entire life – seems to be less risky than being in the same place or migrating to a nearer location.

It appears that the pole-to-pole migration of Arctic tern evolved over a long time. Having started their life in one of the most frigid regions of the earth, they seemed to have migrated during winters – like other animals – towards warmer lands. Their small size might have posed a threat to their survival at one place, while giving them a great advantage in terms of long-distance flight. Ocean breeze helped them to glide without much effort; small body-weight helped them in surviving with small amounts of food.

But why not return to their nests after a short warm-up? It looks that once they migrated towards warmer lands, returning to the same pole would be foolhardy, because they would reach there during severe cold, very bad weather and lack of food. Staying in warmer areas would be risky for the bird due to much better adapted local birds and predators.

Early generations might have suffered doing short-distance migration, and thus learnt the evolutionary lesson to move to the opposite pole. The advantage in terms of abundance of sunlight and less severe weather during polar summers must have played a big role in early migrants’ survival and thus becoming a deciding evolutionary factor. Over millions of years, this might have evolved into an annual bio-rhythm.

But this is just a plausible conjecture. Whatever the causes and incentives, a little bird flying around the globe is an extra-ordinary phenomenon, isn’t it?

Here ends my short take on the little bird that dares to take the longest trip, of all animals on the earth. I leave you to watch an interesting video on this bird’s world tour: Arctic tern migration Google Earth Tour Video