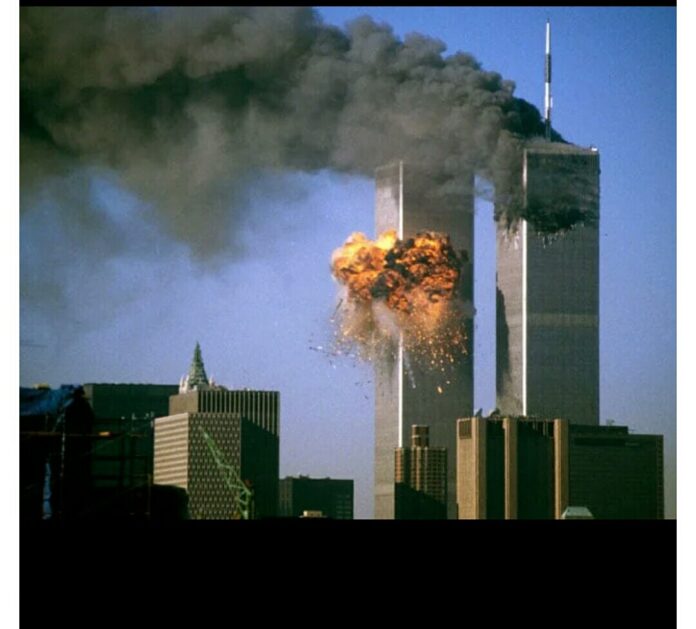 On the first anniversary of the 9/11 attacks on its World Trade Centre towers in New York and the defence headquarters Pentagon in capital Washington, the US President George Bush had invited several Heads of State from around the world that were facing the menace of terrorism,  to consolidate a support in favour of what he called the ‘War on Terror’. These leaders  included the Indian Prime Minister Atal Bihari Vajpayee and Pakistan President Pervez Musharraf among others. There was a large presence of press from across the world, and I was part of a three-member team deputed by the AIR (All India Radio) to cover the main ceremony and other events around it.

Just one year after the 9/11 attacks, the US  changed its course of action against the Al Qaeda terrorists. Even after forcing a regime change in Afghanistan by smashing of the Taliban regime, it failed in eliminating the leadership and the core cadre of Al-Qaeda that had sneaked into the adjoining tribal areas of Western Pakistan, apart from decentralizing itself in some other centres of its global network in Somalia, Yemen and Mogadishu etc. Sensing that it would not be able to fully smash the Al-Qaeda, the US and its allies decided to go after Iraq and its President Saddam Hussain who they thought was custodian of Weapons of Mass Destruction (WMDs).

So we found ourselves in a sombre but, at the same time, somewhat surcharged atmosphere in New York and soon realized that the Americans, whether they were from media or the state officials or even the common people – they all did not seem at all interested in their reprisal campaign in Afghanistan but instead were much more upbeat their country’s new venture in Iraq searching for the (never-to-be-found) weapons of mass destruction there.

Media in New York was jingoistic and wanted the answer in yes or no to its main query to any visiting foreign leader as to whether or not their country would join America in its War on Terror in Iraq. And leaders roaming New York were aplenty, as they had come to address the annual 57th session of the UN General Assembly that coincided with the ceremony to observe 9/11 attacks. They had their concerns and issues, but American media wanted them to answer the first question on its mind.

People from different parts of America too had come to New York to join the events on the occasion. Five band parties had started from as many districts of New York to converge on the spot where the high towers stood till a year ago. To freshen up your memory, the Towers which symbolized the glory and financial might of the American capitalist system, were blown away by the Al-Qaeda terrorists who had hijacked and smashed two passenger planes into the towers killing about 3000 people and bringing down not only the towers to ground but also puncturing the prestige and glory of the lone Superpower.

The place was now a deep ditch barricaded by steel bars to stop curious visitors lest they slipped into the ditch. Things dear to those perished in the attacks had been placed along and on the bars by their dear ones. Leaders, led by Bush, placed wreaths on the marble plates carrying the names of those dead along with their nationalities. Prime Minister Vajpayee also paid his tributes to them.

President Bush made no public remarks and instead the president and first lady spent time talking to the families who gathered at the site together with many of the people who worked on the recovery efforts. The plaque on the President’s wreath read, “Every life taken here, every act of valour performed here, the nation holds in honoured memory.”

Prime Minister Atal Bihari Vajpayee and his Foreign Minister Yashwant Sinha wanted to put forth the India’s view-point (which they shared with us) that attacking Iraq may not be in the best interests of America or the West Asian nations and the US should focus on the terrorist bases in Pakistan and the covert help the intelligence wing of the Pakistan army, the ISI was extending to the Taliban and the Al-Qaeda cadres. However, nobody of consequence seemed to be listening to them.
Also by the same author :

Pakistan continued playing double game, getting billions of dollars from US for fighting terrorists in Afghanistan and harbouring the terrorists in its territory simultaneously. Mullah Umar and Osama took shelter in Pakistan, but the country continued denying their whereabouts till Mullah Umar died in a hospital in Karachi in 2013 and Osama was killed by US special forces in his hideout in Pakistani military township of Abbotabad in 2011.

Back in 2002, India also wanted to finalize the Civil Nuclear deal to ease the US sanctions imposed after the Pokhran nuclear explosions of 1999.  The press communiqué after the one-on-one meeting between Vajpayee and Bush though mentioned that the deal was round the corner. However, it took many years after that and came through only at the fag-end of the UPA-1 when Dr Manmohan Singh put his prestige behind it and forced Sonia Gandhi to risk the government as its main ally CPM opposed it to the extent of withdrawing support to the government on this issue. The support had to be managed through huge amount of money floating among some politicians in the corridors of Parliament.

In 2003, the US attacked Iraq to dislodge Saddam but weapons of mass destruction were nowhere to be found. Shia majority Iraq later went friendly to Iran and many of Saddam’s Sunni soldiers were to soon appear as ISIS , a far more dangerous terror group than the Al Qaeda. US was to trap itself in many knots in days to come, and it became extremely difficult for it to extricate itself from the West Asia conundrum.

Its retreat from Afghanistan recently after 20 years after an unequal deal with Taliban, was disgraceful, humiliating and a very costly affair that left the region far more destabilized and dangerous to all its neighbouring countries who like the US are now finding their losses far outweighing the gains, if any.

*Writer Ajeet Singh is a freelance journalist based at Hisar. He retired as Director of News , Doordarshan in 2006. Before that, he was AIR’s correspondent in Jammu and Kashmir for over 19 years.