राजकाज Fake : The social beverage of our times 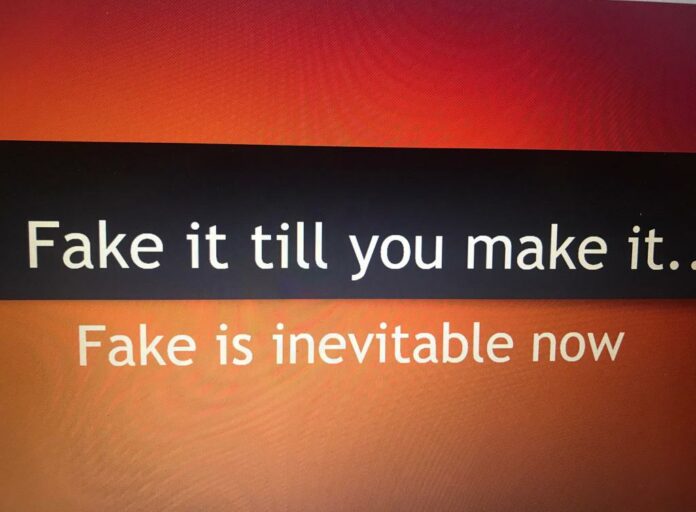 German Chancellor Otto von Bismarck’s 19th century remarks have come to life – ‘people never lie as much during a war or before an election’. Perhaps, it is the most convenient thing to do, and more so when a war precedes elections! How does one fake the facts that holds the key?

Friends wonder if there is anything called ‘lie’; because both as a noun and a verb, ‘lie’ is passé. And, there are reasons to ponder over it. One thing is clear that in this digital world, lie has got a makeover to its less offensive universally acceptable avatar – Fake. In fact, fake is a potent currency in the market which earns rich dividends in a short time as it travels faster than the speed of light.

I am beginning to learn that fake is fast becoming euphemism for instant fame! Is it the new normal lurking around?

A lie may need to be told umpteen times to become the truth, but fake has become a one-time wonder. You release it once, and what returns to your inbox is nothing but the ultimate truth. It will earn you mass following on Twitter, help you receive unprecedented number of likes on Facebook, and inundate you with innumerable compliments on WhatsApp. You begin to wonder if the world was waiting out there to lap it up, and give it a cooperative legitimacy.

Had Nobel laureate and Soviet era dissident Aleksandr Solzhenitsyn been alive he would have rephrased his remarks to read: ‘Fake has become not just a moral category but a pillar of the state’. To rally along fake is considered an act of cooperation, that politicians use for projecting so-called public good in the guise of pursuing vested interests. Far from being challenged, the enduring qualities of fake engage the social media and the public like never before. Like milk, the more you churn it the better it is. Utterly butterly fake-cious!

I don’t know if it worries you that that fake is gaining public recognition, as an essential aspect of our collective existence. George Bush Jr. must be credited for setting up the stage for it. By virtue of having stayed in the White House for almost a decade, the former US President had inadvertently become fond of telling white lies. Else, he could not have convinced the world that there were ‘weapons of mass destruction’ hidden in Iraq? The fact remains that no such weapons were ever found. The shocking truth is that it led to writing a new history, rather a bloody history, written in the middle-east on a rather fake edifice.

One problem with fake news is that it works, and the message that ‘fake it till you make it’ is loud and clear. I checked with my intellectual buddies who are as much awe-struck as anybody else is. On the other hand, psycho-analysts are still juggling on their diagnosis, almost close to arguing that fake is but an evolved form of lie which has got a short-time therapeutic value too. After all, for everything real there is an equivalent fake too! Not only are goods fake, but fake facts are being produced too.

My conclusion on the subject is that we have come a long way – it could easily be called a ‘Fake Yug’. While truth could be ‘half-truth’ or even a ‘quarter’, fake is the new truth that we may have to live with for the rest of our lives.

I hope I am not too early with my judgement, but as of now fake seems essential to humanity but not truth. While truth is desirable, fake is inevitable.

It is become a social beverage that the world is fast getting addicted to!