राजकाज Has the IAS Failed the Nation? Wrong But Necessary Question! 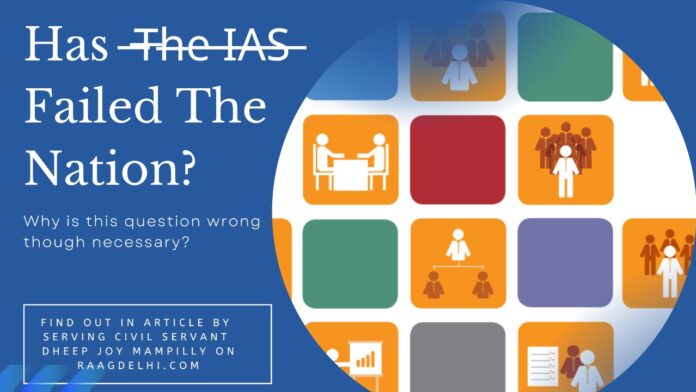 This article deals with some issues relating to the Indian bureaucracy. The question “Has the IAS Failed the Nation” refuses to go since decades despite the fact that scores of social scientists and bureaucrats themselves have grappled with it, yet there are no definite answers. A few weeks back, The Times of India had published two contrasting viewpoints presented by senior bureaucrats. Taking a cue from these two articles, Dheep Joy Mampilly, a young working bureaucrat has presented a viewpoint which seems to be fresh.

Our former President Dr. A. P. J. Abdul Kalam recounts how he learnt the best management lesson of his career. The ISRO project to launch the satellite Rohini into space failed. Dr. Kalam was the Project Director but the then-Chairman Prof. Satish Dhawan took responsibility for the failure.  He addressed the press conference following the failed launch and expressed confidence in his team. The next year, when the mission succeeded, Prof. Dhawan gave the success to his team, stepping back and asking Dr. Kalam to address the press conference.

Why recall this incident now, in a discussion on whether the IAS failed the nation? The lesson Dr. Kalam learnt assumes relevance because of a concern, shared by many civil servants, that many in the IAS are yet to learn this simple yet fundamental lesson. And this includes not only the nobility and modesty of good leadership, exemplified in how a leader assumes responsibility, shares credit and builds others. It encompasses a more basic truth which we fear is curiously lost on more than a few members of the IAS fraternity: we can’t do it alone, we need each other.

Yes, to do good, to accomplish anything great, to make a positive difference in people’s lives, we need the inspired contribution of our fellow brethren, most likely a lot many of them. The need for collaboration across organizational and societal boundaries has become even more vital in recent times, with increasing interconnectedness and interdependence of our world and the complexity and interdisciplinary nature of the problems we need to address. It is hence unfortunate and disconcerting to say the least, to find very many IAS officers apparently so full of themselves, demanding undue public attention and recognition, as if the world moves ahead by virtue of their will and command alone.

No doubt, numerous IAS officers have rendered and continue to render exemplary service to the nation. Needless to add that they don’t need any validation from anyone. But, as a system, the IAS seems to continue to live in a world where they are the lords, and the rest minions.

How else can the IAS continue to occupy most of the senior positions in the government, as well as in constitutional and regulatory bodies? How else can they tolerate a system which gives them differential treatment including faster career progression vis-à-vis other “non-elite” civil services? How else can they afford to talk only or even majorly about themselves and their contribution, conveniently ignoring or forgetting the numerous people from various civil services who enable them to achieve and who often do the real execution?

The IAS, significant as it is, appears to be too obsessed with itself, at least as suggested by the state of the system and by the utterances of the vocal members of the IAS fraternity. This is what is fundamentally amiss in retired IAS officer Duvvuri Subbarao’s article “Has IAS Failed The Nation?” (Times of India, March 26) as well as in the counterpoint by another former IAS officer Deepak Gupta’s article “Has IAS Failed The Nation? Not Really” (TOI, April 6). Remarkably, neither article makes barely a mention about any of the numerous other civil services in the central and state governments. And thus, here itself, we have a big part of the answer to the question the two former IAS officers pose.

Having reflected on why the question is essentially wrong, let us analyse some of the arguments put forth by the two retired IAS officers.

In attempting to marshal evidence in support of the competence of IAS officers, Deepak Gupta cites a World Bank study which says almost every single case of reform involved a competent IAS officer at the helm. What great epiphany does this contain, even if true? What else is to be expected when IAS officers keep themselves at the helm of most institutions? It’s like saying that almost every successful surgeon is a medical doctor! Moreover, what about reform opportunities which the IAS failed to capitalize on? Did the World Bank study look at them as well?

Further, in an article laying claim to the superlative competence of the IAS, Gupta expresses concern that articles such as Subbarao’s which “sully reputations in a generalized manner” will demoralize serving IAS officers. But if the IAS officers are so competent and are doing good work, why does the author fear they will get demoralized by a mere opinion piece, even if it were to be followed by a decline in public trust in their competence? Are their egos so brittle, their confidence so shaky, their work ethic so vain? The question begs itself.

Perhaps most importantly, Gupta says it is unfair to blame IAS alone for our governance deficit and failures. Well, when the ship sinks, are we going to blame the sea or the mechanic, or should the captain take responsibility? Surely, the IAS can take at least some responsibility? At the same time, Gupta wants good work of IAS officers to be publicized; that’s fair, so long as it is intended to replicate and inspire the good rather than to merely change perception and massage their egos. But then, if credit is due, surely responsibility too is due.

And who else but the IAS is to blame for the blame being confined to only one service. Did the IAS bring other services to the helm who could then have shared the blame or responsibility? Even Gupta’s article too, like Subbarao’s, is obsessed with IAS. As if others exist only to distribute or shall we say delegate blame/responsibility!

Lastly, it is important to realize that failure of the system does not necessarily mean everyone in the system has failed. The two are not inconsistent; the system may have failed despite your best efforts to reform and rescue it! And it may have failed in an even bigger way, had it not been for your contribution. As I understand it, Subbarao’s article is against the system the IAS evolved to be, not the individual IAS officers per se (though yes, many officers do arguably contribute to the decadence of the system, by acts of either omission or commission). Rather than demoralize, it should only inspire civil servants to engage in a shared reflection on their contribution, to build better systems which better amplify the collective infinite human potential of our people and better serve the oft-elusive public good.

And the need of the hour is for more enlightened and inspired people to join and be a part of failing or failed systems. After all, it is not the healthy but the sick who need a doctor. And lest we forget, that doctor need not always be the IAS. It can be anyone, including you and me. And is more often groups of people trying to create a good system, rather than simply someone meaning well, and hardly ever a self-important and self-serving lone genius. Yes, Together Everyone Achieves More; collaboration has always been and continues to be essential to create enduring meaning.

*The writer is an officer of the Indian Information Service (Batch of 2012); views are of course personal. He can be contacted at newdheep@gmail.com, Twitter @DheepJoy