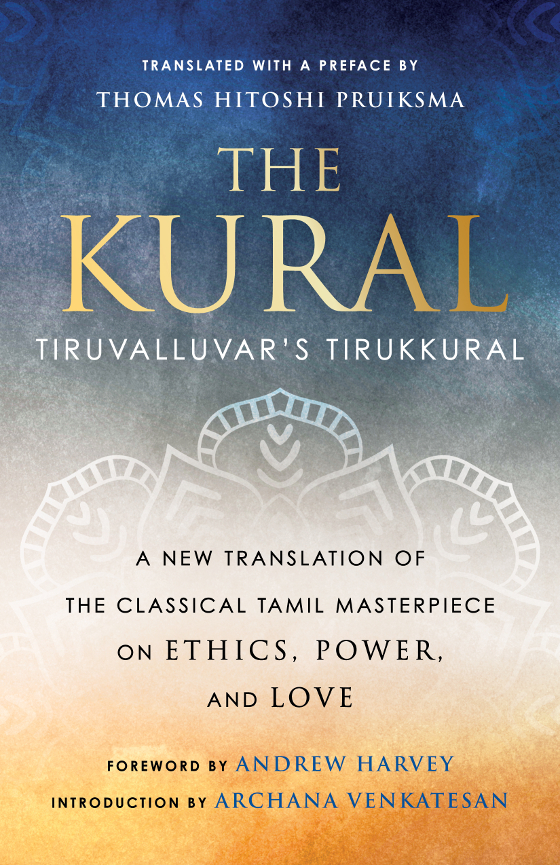 Thiruvalluvar is India’s especially revered and loved poet and philosopher for his epic collection of verse, the Tirukurral or simply, Kural – an independent couplet in which the first line consists of four words and the second line three. Scholars often date it between the third and fifth centuries CE, at the end of what is known as the Sangam period, a time of literary flourishing in the southern state of Tamil Nadu. The name of the book combines the honorific Tamil prefix Tiru – “eminent,” “beautiful,” “holy”—with the name of the specific Tamil verse form that Tiruvalluvar employs, the ‘kural venpā’. The poet is believed to have lived in Mylapore, a neighbourhood in the central part of the State capital, Chennai. The 1,330 stanzas or kurals in the Tirukkural are divided into 133 chapters or themes called ‘Adhikaarams’.

The themes virtually cover every aspect of a human being’s life. They soar above time and space, cultures and religions, quite effortlessly. They affirm one’s belief in the universality of the human soul, its eternal swings between the grand and the wicked, the power of love, the wastefulness and sourness of strife. In its sweep and scope, it can be likened to Kabir, Rumi, Shakespeare, Milton, Homer and other works of great philosophical scope and earthly poise. Indeed, the Kural is dismissive of caste and other hierarchies.

As the translator Thomas Hitoshi Pruiksma says: “ The book covers a vast array of human knowledge, experience, and wisdom, offering an intricate interweaving of ethics and poetry, full of wordplay, sharp imagery, and rhythmic sophistication.” Elsewhere, he adds: “Tiruvalluvar uses this form (stanzas) to elucidate what it means to live a good life.” The Kural gracefully combines philosophy, pithy wit, wry ethics and rugged pragmatism.

Pruiksma explains: “Each chapter of the Kural consists of ten kurals on a single theme, such as friendship, hospitality, or rain. These verses are both complete in themselves and part of a larger whole in which all the different verses complement, augment, and amplify each other. 133 chapters, in turn, are arranged into sections that cover three of the four aims prescribed by Hindu tradition—virtue, wealth, and love. Most commentators claim, and I’m inclined to agree, that Tiruvalluvar leaves out the fourth aim—liberation from the cycle of birth and death—because if a person pursues the first three wholeheartedly, the fourth is a natural result.”

It is scarcely surprising that the Kural has been translated into more than 40 world languages, and with over 50 versions in the English language alone. Pruiksma’s translation is a work of love, dedication, erudition and rigour. Explaining the pattern of verse, he says in his introduction: “More than one translator has referred to the kural form as a couplet, but doing so risks a misunderstanding. While a kural does consist of two lines of poetry, they are not matched metrically, as a couplet by Shakespeare might be… In addition, a kural is not end-rhymed but rather follows a sophisticated and nuanced pattern of assonance and consonance that has characterised Tamil poetry from its beginnings.” The translation tries to capture this cadence.  Here are some excerpts from the book which is scheduled for release in January next.

631   Great in means in method in timing and in action—

That is a minister

That is a minister

634   Able to discern to act from discernment and to speak

Beside him must speak true

639   A million million enemies—better than a minister

Plotting wrong at one’s side

640   Even planning perfectly ministers without mastery

1032   Farmers sustain everyone not farming—they

Are the pin holding the world together

1033   They live who live by farming—all others

1034   They see many shelters beneath their king’s shelter—

Those whose fields shelter grain

And gives freely to beggars

1036   If farmers fold their arms those saying

I need nothing cannot be

151   Like earth that bears digging those who bear scorn

152   To bear transgression is always good—to forget it

154   If one seeks excellence without end protect

A life of renown

157   Better to suffer wrong than to wrong

Others who wrong you

159   Purer than saints—those who endure

160   Those who endure without eating are great—after those

221   Giving to those with nothing is giving—all else

223   Giving and not crying I have nothing—found

In those of good family

226   Ending the ruinous hunger of the poor—a safe

That stores a man’s wealth

227   The vicious disease that is hunger cannot touch

The joy of giving

271   At the hollow conduct of a dishonest heart

The five senses laugh within

To tower to the sky

274   One who does wrong behind tavam—hunter

275   The false conduct of him who says he needs nothing

Will make him cry out what have I done

276   None more cruel than those seeming to renounce

And living by falsehood

277   Some seeming as regal as a red rosary pea

Are as black at heart as its tip

278   Plunging into the waters of greatness many hide

False conduct in their hearts