Under the Lens WHY ARE GUT MICROBES SO IMPORTANT FOR OUR HEALTH? 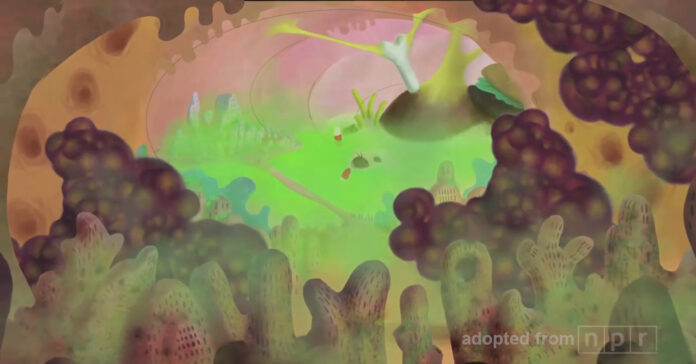 Why are gut microbes so important for our health? Before we come to the main discussion, let us define a certain expression.

Gut refers to the digestive tract.

Gut microbes are also called gut microbiota, gut flora, intestinal microbes, etc. These are microscopic organisms found in the human gut. Most of these are bacteria, which are single-celled creatures. Protozoans and viruses are also there but in lesser numbers. Of course, nematodes and other ‘worms’ or parasites are not included.

When we talk of gut microbes, we generally think of microorganisms living in the digestive tract down the stomach because small and big intestines and colon are the main areas where most of the gut microbes live. So, the gut microbes are also referred to as intestinal microbes.

We also talk of them as gut flora, because most microbes are bacteria, which are a type of plants rather than animals (in fact they are neither).

The sum total of microbes in the intestines is referred to as intestinal microbiome – a part of the total human microbiome. The term microbiome is also used for the sum of genetic material of all the microbes present.

An important nerve-cum-endocrine mechanism exists between the gut and the central nervous system (brain and spinal cord) and controls a large number of body functions. This is referred to as gut-brain axis. The action of gut microbes is a significant part of this axis. As gut microbes play an important role in that, it becomes gut microbiota-gut-brain axis.

The expanse and variety of microbes in the human gut

Internally, microorganisms colonise the windpipe and the lungs, the food pipe and some parts of genital organs.

Talking of the food pipe, microbes inhabit all its parts, starting from the mouth to the anus. The largest number and variety of them, as mentioned earlier, is found in the intestines.

It was earlier believed that the number of microbes colonizing the human body is about ten times that of human cells. The latest estimate, though more conservative, says that bacteria in different parts of the human body are about 1.3 times the number of human cells. Besides, there are viruses and some other types of microorganisms whose number might be as big. The numbers are huge and their estimates vary from 37 to 100 trillion (in Indian system, 37 lakh crore to 1 crore crore)! If all these microorganisms were as big as human cells, we would be carrying a microbial weight and volume much bigger than our own. Even with their smaller size, our guts carry about 200 grams of microbes and we keep shedding as many in the faeces.

Interestingly, the genetic variation in the gut microbes is even greater. As against about 23 thousand genes in the human genome, the genes present in microbes run to a figure of many hundred thousand! It is estimated that there are 360 times as many bacterial protein-producing genes as there are human genes that produce specific proteins. Among bacteria, between 500 and 1000 species o inhabit an adult’s gut, their total number in the human population running into many thousand. There is still more diversity within the species – and the total number of sub-species is likely to be in many thousands.

Development and composition of the gut microbiome

The first dose of microbes – including those in the gut – comes from the mother. It keeps changing as the infant consumes breast milk and then other types of food. The composition of the gut microbiome stabilises in about three years, and it remains more or less stable in healthy human beings.

The microbes in the gut create and become part of an ecosystem, like a natural forest where different types of animals and plants live in a way that one gives shelter and food to the other, one lives inside the other, one kills the other, one’s dead body provides nutrients to the other… The type and quantity of food, acidity level, etc. keep changing as the undigested food moves down the food pipe, and so the composition of ‘forests’ also changes within the same person’s gut.

Many factors decide the composition and working of gut microbes, the most important being the type of birth (Caesarian or normal), early diet (breast milk taken or not), regular diet as a grown-up, age and use of drugs (especially antibiotics).

How useful or harmful are the gut microbes?

The resident microbes, overall, are highly beneficial to humans. There can be some microbes that are bad but in a healthy individual with proper diet, they are outnumbered and ‘made to behave’ by the beneficial ones. When external harmful microbes (=pathogens) invade, they can dominate the microbiome (e.g. when we consume contaminated food or water), leading to disturbance in the balance and in turn many ailments.

This article does not have enough space for listing out the numerous benefits that have been found to be accruing due to gut microbes in studies on lab animals and humans. Many are too technical because the microbes work at the molecular level and act upon biochemicals and influence complex biochemical/ physiological processes. So, I will try to list them in common expressions and then give some instances.

The gut microbes help humans by:

Let us now see how some germs (or their functions) help the human body as found in studies on humans and animals:

What impacts the health of the gut microbiome?

Many factors impact the composition and health of the gut microbiota. Some factors such as age and normal diet are natural. In the majority of people who take hygienic food and water in the right quantity, the ecosystem runs fine, not much disturbed, and the person remains healthy. In some, due to congenital or other factors or eating habits, the microbiome remains perpetually disturbed.

Since most of gut microbes in the newborn baby come from her mother, there is a difference in the number and composition of microbes when the baby is born naturally or before time through Caesarian operation or when she is fed breast milk or other diets.

Junk food and low-fibre western diets that have high amounts of preservatives and low quantities of fibre lead to an unfavourable mix of microbes: The ones that feed on mucus, which protects the inner gut lining colonize the gut, while those feeding on fibre and producing useful chemicals lose out.

Contamination of food and water causes pathogens to enter and colonize the gut. When these remain untreated, the natural microbiome can become highly disturbed. A vicious cycle sometimes develops in which beneficial microbes keep going down and harmful ones keep invading more areas of the gut.

Oral drugs react with gut microbes two ways: they impact the health of microbes, and microbes also act on the drugs by aiding or hindering their absorption and breaking them down into new chemicals.

Let us talk specifically of two introductions to our body that have a huge impact on the health of gut microbes and in turn our own health:

Some companies sell probiotic food supplements at exorbitant prices, and claim that these products can cure most diseases of the food pipe. Their claims are true to the extent that the large number of microbes introduced by them into the gut are beneficial to humans and can overwhelm pathogenic microbes. However, such concentrates cannot replace a naturally occurring microbiome. In our simile of the forest, it is like planting one or two types of trees in a forest that has been destroyed by fire: it is much better than a barren forest but not as good as a natural forest.

The impact of antibiotics has been found to be long-lasting on the composition of the gut microbiome, sometimes going on for many years. The least that antibiotics can do is tummy upset (mostly because many components of food remain undigested and some foods ferment in a new way) and loss of appetite. Many other symptoms such as fatigue and irritability occur partly due to antibiotics’ impact on other systems and partly due to loss/ upsetting of the gut microbiome (e.g. non-absorption of nutrients, unhappy neural signals). But, as the list of benefits from gut microbes given above would suggest, the harm caused to the gut microbiome by antibiotics is usually much beyond the uncomfortable symptoms.

The action of antibiotics on the gut microbiome has been studied in detail. It has been established that antibiotics reduce the population of beneficial bacteria in the gut and create conditions for an opportunistic invasion even by the microbes living harmlessly when in small numbers. For example, a particular type of bacterium (Clostridium difficile) – which is there in the gut but in very low numbers – grows in large numbers and causes diarrhoea and [sometimes] serious diseases.

More and more research indicates that the gut microbiome acts like another organ of our body: It is a supplementary digestive system, an endocrine gland (the one that creates a hormone) and a subsidiary brain. It also is an immune system!

However, in some cases, the causative relationship has not been established and in some, specific microbial functions have not been understood. Some studies are based on animals and definitive results are not documented in human studies. Hope, in times to come, humanity will be able to harness this wonderful forest of tiny friendly creatures for our overall health as well as fighting specific diseases.

We, as individuals, cannot wait till the mainstream medical science integrates microbiome and doctors start considering it in diagnosis as well as treatment. Till then, let us learn from the existing wisdom and not do things that disturb beneficial gut microbes. What does your gut feeling say?

Let me leave you with a small interesting video taken from NPR: