Under the Lens Ram Setu : Is it a natural bridge or made by Lord... 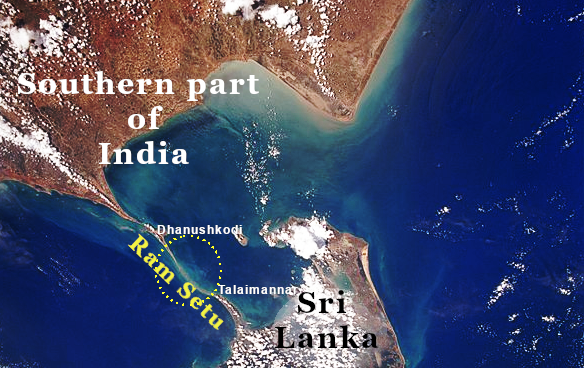 Ram Setu (also spelled Ram Sethu) or Adam’s Bridge has been in the news for many decades in India. Some Hindus see it as the bridge constructed by Lord Ram’s army when they had to enter Lanka (perhaps the northern part of today’s Sri Lanka) to fight the demon king, Ravan. On the other hand, geologists and non-believers see it as a rock formation stretching from India to Sri Lanka. They see it as an obstruction to what could have been a waterway for sea-borne traffic through Palk Strait.

Ram Setu runs between Pamban Island (Rameswaram Island) on the east of the southernmost tip of India to Mannar Island on the west of the northern tip of Sri Lanka. More exactly, the Indian part of the bridge starts from an abandoned town, Dhanushkodi, and the Sri Lankan part starts from the town of Talaimannar.

In other words, Ram Setu lies across the Palk Strait or the passage between India and Sri Lanka.

Ram Setu is 48 km long stretch of limestone rocks that lay lined up on the shallow waters between its two ends. The rocks are broken, and while some are above the sea, some are submerged up to one metre under the sea. Thus, it is sort of an underwater ridge, called shoal in oceanography. Perhaps, most of it was above the sea until 1480 when a cyclone broke and flattened it.

Space imagery shows that Ram Setu consists of 103 small and big rock pieces (reefs), with thin channels between them.

What geology says about Ram Setu

There are many theories about how the bridge actually arose. One theory says, it was formed due to separation of Sri Lanka from India over a long time-span, leaving a trail of shoals. Another one says, it was formed due to sand deposition, chemical reactions and coral activity between the two land masses. There are many other possible ways, and a mix of them, in which the bridge/ ridge might have formed over time.

Carbon dating of rocks and coral remains from Ram Setu suggest that the top rocks were formed between 7000 and 18000 years back.

The ridge between India and Sri Lanka, of which Ram Setu is the main part, does not allow straight navigation between the eastern and western parts of the two countries. For covering the distance of a few kilometres, vessels have to sail about 400 km around Sri Lanka.

Dredging a canal through the ridge was conceptualized and tried many times during the British period. After independence, a number of committees were formed by successive Indian governments on this subject, and most of them have recommended cutting a channel through the land mass or extreme ends of the ridge, without disturbing Ram Setu. One committee has rejected the idea altogether on ecological grounds.

The projects to dig a channel through/ around Ram Setu – called Sethusamudram – have a chequered history. The first such project was conceived in 1860 but could not be taken forward for one or the other reason – mostly economic. In 2005, after years of discussions and planning, it was launched as a modern project, and some work was indeed started on it. It has now been abandoned because the present union government in India is not if favour of disturbing Ram Setu primarily because it will hurt the religious sentiments of Hindus.

During the heydays of the project (between 2005 and 2010), the votaries counted huge economic benefits from the project in terms of lower cost of transportation across the Palk Strait, local development, employment, etc. The project was also seen to give India a strategic advantage by controlling a sea channel. On the other hand, its critics maintained that the project would be economically unviable after considering all relevant factors including likely low tariff, small ship sizes to be allowed and huge project cost (nearly Rs. 30000 crore at present estimates), in addition to destroying environment and taking away livelihood of local fishermen.

What the Hindu mythology say about Ram Setu

Devout Hindus consider any place connected with Lord Ram – who is considered an avatar of the almighty and embodies noble virtues – very sacred. According to Valmiki Ramayan, one of the oldest Sanskrit scriptures, vanars, who made Lord Ram’s army against Ravan, created the bridge under the guidance of Nal and Neel. They used stones that could float on water and were able to construct the bridge in five days.

It is also stated that Lord Ram destroyed the bridge after crossing it on the return journey after vanquishing Ravan.

Where geology and faith get mixed up

In Ramayan, Valmiki did not tell the location of Lanka. The concept that the present day Sri Lanka was the Lanka of Ramayan seems to have arisen slowly and was established in Indian folklore around the eighth century.

In one study, it was found that age of the Ram Setu rocks, estimated through carbon dating, matches the likely dates of Ramayan. Another study found that the coral formations in the ridge sit on a layer of sand, something that does not happen naturally because corals stick to solid rocks and grow on them – thus indicating that the bridge is man-made. It is also reported that the upper rocks of Ram Setu are younger than the base deposits, proving again that it is a man-made structure. Some researchers have found holes in these findings.

It stands to reason that if there was a ridge connecting two landmasses, which was partly submerged, humans would try to engineer a foot-bridge by raising the submerged areas with the help of stones. So, there is a strong possibility of a human structure on top of a geologically created ridge. Lord Ram, taken as human incarnation of the almighty, lived with human limitations, and it is natural that he got a temporary bridge constructed over an existing ridge for moving his army to the enemy’s fortress.

Araheaological Survey of India has found no proof to support the religious belief. After some indulgence, it stopped trying to prove or disprove any hypothesis. So, the construction of Ram Setu by Lord Ram is not borne by archaeological evidence, at least till date.

It is a fact that a partly submerged ridge exists between India and Sri Lanka. The ridge is definitely a geological formation. Whether Lord Ram’s vanar army actually constructed a pedestrian bridge by dropping rocks on the ridge is more a matter of faith than history or geology.

World round, there are many places/ structures/ monuments supposed to be sacrosanct according to one or the other belief. Some research goes on to find if the belief can be proven historically or archeologically. Irrespective of the findings, the world community respects religious sentiments attached with these places. Ram Setu is one such place.

*About the author: This article has been contributed by Manoj Pandey. He does not like to call himself rationalist but insists on scrutiny of apparent myths as well as what are supposed to be immutable scientific facts. Please don’t take the views of the author as the views of Raag Delhi.